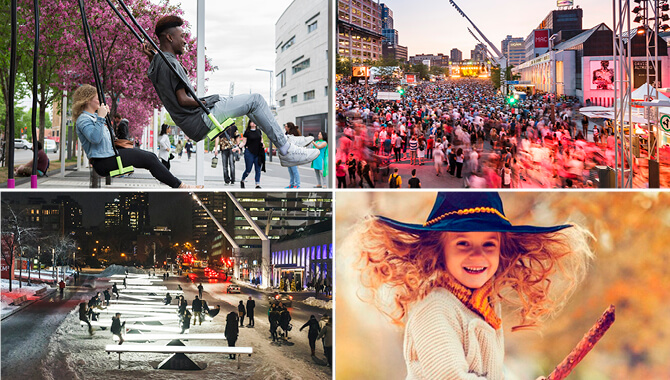 Join us for a look at some highlights of the many events that enlivened the city’s cultural heart through all four seasons of an exceptional year.

The year started off in fine form with Les Hivernales and the Barbegazi challenge, a seriously fun obstacle course that attracted big crowds and helped us forget the winter chill for a little while. In February, the Montréal en lumière festival and its traditional Nuit Blanche once again brought a party atmosphere to every part of the Quartier des Spectacles. And then there was the inaugural edition of Illuminart, a new winter art event featuring light-based artworks and installations.

Also in February, dance lovers were treated to the opening of the winter-spring seasons of Tangente and L’Agora de la danse in the new Espace Danse in the Wilder Building. Lastly, the Opéra de Montréal presented an exciting new work, Another Brick in the Wall, inspired by the music of Roger Waters and Pink Floyd, a memorable start to the season and one of the highlights of Montreal’s 375th.

The arrival of spring brought the return of 21 Balançoires/21 Swings, the collaborative installation by Daily tous les jours, which gave a splash of colour to the Promenade des Artistes. Starting in May, Les Jardins Gamelin once again made Place Émilie-Gamelin a cultural hot-spot with a soothing green temporary set-up that hosted a jam-packed calendar of activities. New this year, the Maison jaune and family mornings with Petits bonheurs helped make Les Jardins an essential family destination. The entire city thrilled to the arrival of the Giants. The super-sized marionettes by the Royal de Luxe company enchanted Montrealers of all ages, who came out by the thousands to watch them.

A highlight of Festival TransAmérique (FTA) was 100% Montréal by the Rimini Protokoll collective, a performance celebrating the many faces of Montreal. In June, music lovers were delighted by the Symphonie montréalaise, combining the considerable talents of the Orchestre symphonique de Montréal, composer Samy Moussa and Moment Factory.

In August, music lovers enjoyed another fine edition of the MUTEK electronic music festival. Later, the Montreal First Peoples Festival took over the Place des Festivals with Ioskeha & Tawiscara – The Great Game of Creation by Terres en vue, an inspiring and poetic theatrical work and procession. The same festival also presented Nova Stella, a show featuring a large cast of artists and other participants who celebrated diversity and inclusiveness through art and music. Finally, the summer wrapped up with a massive musical party with the Électro Parade mobile dance party.

Starting in September, the artworks and installations of the KM3 public art walk http://www.quartierdesspectacles.com/en/blog/718/public-art-cubed turned the Quartier des Spectacles into an open-air gallery, while 375 people line-danced for the Super Méga Continental by Sylvain Émard Danse. Also in the fall, the Danse Danse company kicked off its 20th season at Théâtre Maisonneuve with a new piece by Marie Chouinard. On the Place des Arts Esplanade, the Expo 67 LIVE projection by the NFB had us experiencing or reliving the thrilling experience of the universal exposition.

October was even scarier than usual, with a series of spine-tingling Halloween events. The legend of the Trouble-fête, L’éveil des morts and the Zombie Walk brought out hordes of ghouls and living dead to spook us all! Science fiction fans had a special treat at the Festival du Nouveau Cinéma with the Canadian premiere of Denis Villeneuve’s Blade Runner 2049. Barely a year after his passing, Montreal poet Leonard Cohen was the subject of an exhibition, A Crack in Everything, at the Musée d’art contemporain; the show continues until April 9, 2018.

In December, Luminothérapie brought light and joy with the return of the Impulse installation and the new architectural video projection Les lointaines. Finally, this special anniversary year will close on a homey note, with the smell of evergreens and an old-fashioned Christmas atmosphere thanks to the Grand Marché de Noël de Montréal.