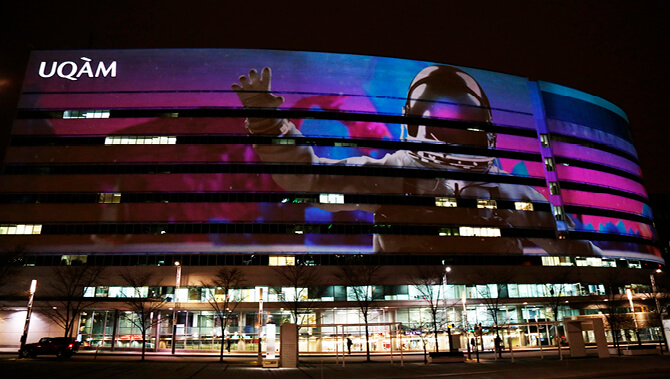 This year, Luminothérapie takes you into deep space, with the architectural video projection Les Lointaines. The projection is a poetic, four-chapter narrative built on colourful, contemplative tableaux that transport us to new planets. Winter nights are so very long – all the more reason to look skyward.

WHERE DOES LES LOINTAINES TAKE US?

Amélie Petit Jean: We take viewers on a trip to outer space – so they go very far! The story starts with the discovery of a planet, continues with an expedition to visit it, and concludes with the first steps taken on it.

Thibaut Duverneix: It’s a metaphor for travel, discovery, curiosity and seeking, in a general sense.

Mathieu Léger: It’s also about innovation and creation. Those aspects resonate with us, because we see a parallel with the projects for public spaces that the Quartier des Spectacles presents, and the exploration of still-unknown territory.

WHERE DID THE IDEA FOR A SPACE JOURNEY COME FROM?

ML: Themes like the solitary space traveller, multiple dimensions and faraway planets would often come up in our discussions about our various projects. When the Quartier des Spectacles gave us carte blanche for this piece, we said it was the perfect time to explore those ideas.

TD: The art director, Geoffrey Skrajewski, wanted to experiment with a mix of 3D, photorealism and collage to create a video project, and a trip to outer space was a good fit for that. We wanted to create a cinematic aesthetic and show images, contemplative scenes, panoramas.

ARE THERE SPECIAL CHALLENGES TO MAKING AN ARCHITECTURAL VIDEO PROJECTION?

AP: Outdoors, quality and visibility will vary depending where you’re watching from. There’s also light pollution to consider, because the Quartier des Spectacles is a very busy, very well lit place. That influenced the visual and graphic style. We had to do several tests before settling on an artistic approach.

ML: It was a big challenge to create a narrative for such a large surface, which is neither white nor uniform and has its own particular architectural lines. We had to account for all those factors and leave our comfort zone. We used new colour palettes and played with luminosity in new ways. Normally we do a lot of chiaroscuro work, this time we looked for maximum impact through contrast.

HOW WOULD YOU SUGGEST VIEWERS MAKE THE MOST OF THE EXPERIENCE?

AP: “Sit back and relax!” We want to make people dream. So just take a break and let yourself be carried away by this little story, told without sound or words. It taps into our collective fascination with space and travel, so it’s a universal story that’s easy for viewers of any age to understand.

ML: Enjoy the dazzling colours that bring a bit of warmth to winter in the city!

GENTILHOMME is a creative studio working in multimedia and new technology. It specializes in shows, movies and interactive installations both temporary and permanent. That breadth stimulates the imagination and makes magic, helping viewers forget the technology.

Until January 28, façade of the Pavillon President-Kennedy, UQAM