Welcome To The Weird And Wonderful World Of HUMANORIUM 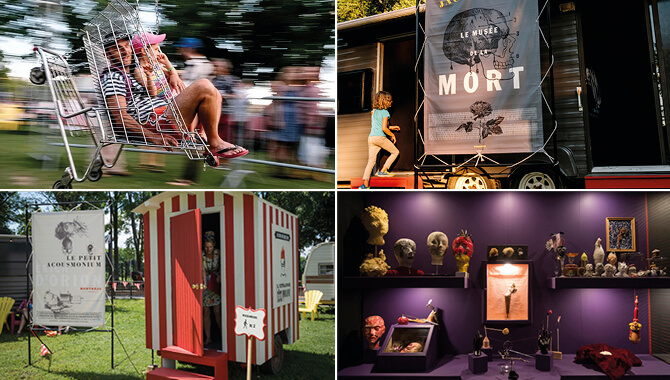 With fall colours in all their glory, contemporary art is bringing even more vibrant tones to the Quartier des Spectacles, thanks to an especially strange and festive event! From October 5 to 15, come to Les Jardins Gamelin to enjoy a riff on the special atmosphere of 19th and 20th century carnivals, with artworks celebrating the dark and bizarre aspects of human nature. Presented for the first time in Montreal by EXMURO arts publics, HUMANORIUM is part of the KM3 participatory art walk.

Vincent Roy, the organization’s executive and artistic director and Humanorium’s co-curator, with Ève Cadieux, spoke with us about this intriguing event. 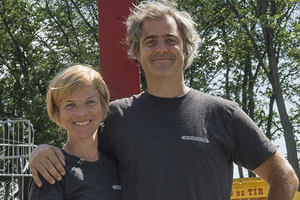 Where did the idea for the project – part freak show, part travelling art exhibition – come from?

HUMANORIUM has its origins in an outing with my daughter a few years ago, to a travelling country fair where we toured a very run-down haunted house attraction. Its sad state allowed me to get a look behind the scenes, and that made me want to reinvent the house of horrors, and use it as the basis for a contemporary art exhibition. At EXMURO arts publics, we’re always looking for new ways to bring art to the public and to present travelling art shows. The result was HUMANORIUM, which opened in Quebec City last summer.

Humanorium, presented in Quebec City during the summer of 2016

What kinds of works were you looking for?

We wanted works that explored the beauty and ugliness of humanity, and that could be adapted to structures inspired by the carnival tradition: the museum of death, the freak show, etc. The idea was to present new works, some of which might already have been shown in museums, but in a more antique and experimental setting. That’s also the spirit in which we included works like Stand de tir (shooting gallery) by Marc Séguin, Sirenomena by Dgino Cantin, and La Machine à vue by Eruoma Awashish and Nicolas Lévesque.

Continuing in that vein, could you tell us more about the works that comprise HUMANORIUM – the strange carnival?

There are a dozen works, including photography, sculpture and installations. There’s a carousel, by BGL, made of shopping carts in which riders play the role of “merchandise.” Le Musée de la mort – the museum of death – showcases the work of Toronto artist Jack Burman, who has been photographing human remains and their preservation for more than 30 years. In La Chambre des curiosités 1, sculptor Dgino Cantin exhibits representations of strange beings and imaginary creatures. Le Petit acousmonium immerses the visitor in the vast sonic universe created by Érick Orion. Sculptor Louis Fortier gives us food for thought with La Chambre des curiosités 2, where visitors find themselves being observed by the works on display. Lastly, Théâtre Rude Ingénierie confronts viewers with a machine that’s trying to communicate with them.

So the exhibition walks a fine line between beauty and ugliness...

Exactly, and that’s also a recurring theme in the history of art and of humanity as a whole. Beauty and ugliness have both always been fascinating. That’s an idea reflected in the work of Catalan multidisciplinary artist Joan Fontcuberta, a specialist in the strangeness found on the Internet (the true modern-day freak show), whose Freak show presents examples of ordinary people who modify their appearance and create new identities for themselves. It’s a very human paradox. We’re beautiful, but we’re also ugly inside and we can also see that everyone has their dark side, their little freaky streak… That said, we didn’t want to be shocking just for the sake of it, nor just poke fun. Instead, we wanted to take a critical look at human beings, death, beauty, and things that are strange – or not!

What drives you to put together such out-of-the-ordinary contemporary art exhibitions?

I tend to think that people need to be shaken up a little, sometimes, and HUMANORIUM is anything but a presentation of the beauty of a perfect world. It’s also a way to reach out beyond the usual circle of art aficionados and attract an audience that may never have been exposed to contemporary art. The artists we approached all appreciated the planned format and accepted without hesitation. I think people will be surprised, because what they’re going to see isn’t fake or theatrical. There are facilitators on-site to talk to visitors about the works and demystify the artists’ creative approach. In the end, more than anything we want people to say that they had a stimulating and enriching experience at a contemporary art show.