Montreal gets its funny on 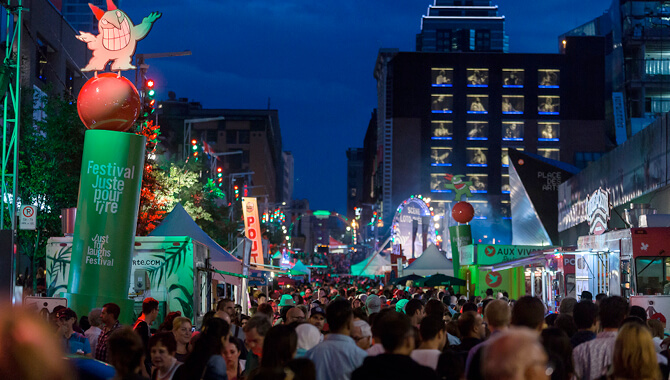 Summer is… just for laughs! It’s also Just For Laughs, the 35-year-old world-class bilingual comedy festival (aka Juste pour Rire), along with its cheeky offspring, Off-JFL, since last year held under the umbrella of Zoofest. The two events deliver non-stop laughs both indoors and out. There’s a huge number of shows to choose from – here’s a small sampling.

The main Just For Laughs festival has its usual fine selection of stars. This year’s biggest show might just be the Jerry Seinfeld & Gad Elmaleh superstar double-bill at the Bell Centre on July 26  – yes, there are still some tickets left! Judd Apatow continues his return to standup, rising to JFL headliner this year after some surprise Off-JFL sets last year. The line-up of A-listers just keeps going, from The Late Late Show’s Craig Ferguson to The Daily Show’s Trevor Noah, and many more. There are also perennial favourite theme shows like the Nasty Show, hosted by Ari Shaffir, on a ten-show run at Métropolis starting July 19.

The festival is justly famous for its comedy galas, and this year promises to be as exciting as any. David Spade hosts his gala on July 26; later the same night, Saturday Night Live’s Colin Jost and Michael Che host theirs – why not make it a gala double-feature? Local hero Sugar Sammy’s International Gala runs for two nights, July 27 and 28. Another Canadian star, the delightfully snarky satirist Rick Mercer, hosts his gala on July 27. And if you’re still mourning 30 Rock, be sure to check out the Jane Krakowski Gala on July 28. Last but not least, a 35th anniversary edition of JFL coinciding with Montreal’s 375th simply can’t end without a roast of its home city! The gala to end all galas – for this year, anyway – is the Montreal: An Intervention Gala on July 31, featuring a bunch of great comics and plenty of local celebs poking fun at our fair city.

On July 30, on the Vidéotron stage, thousands of Montrealers will get up and shake it with Kool and the Gang, who will close the festival’s outdoor program in style with an upbeat set of unforgettable funk and disco hits!

Since last year, Zoofest has presented an expanded bilingual program – the result of a merger with Off-JFL, the all-English comedy fest featuring rising stars in intimate venues. Zoofest’s Off-JFL schedule gets rolling this week, with local comics in the spotlight at the Montreal Show on July 20, and some great up-and-coming women comics at Ladyfest on July 20 and 21. And don’t miss Montreal’s own DeAnne Smith, on a seven-performance run of her Post-Joke Era show. Be sure to catch SNL alum Sasheer Zamata at the Katacombes on July 24, 25 or 27. If you’re always scared to sit in the front row at a comedy gig, there’s no better cure for your phobia than What’s Your F@#king Deal?! (Café Cléopâtre, July 25-29) where all the comics, including host and master of filth Big Jay Oakerson (also featured in the Nasty Show), will taunt and tease anyone and everyone, whether they’re sitting up front or not.  And that’s just for starters; be sure to check out the full Zoofest/Off-JFL line-up. Note: many Off-JFL shows are for adults only.

After so many gut-busting nights of non-stop comedy, you might just need to spend August resting your ribs and wiping that smile off your face. Life is rough!