The tech wizardry behind Luminothérapie 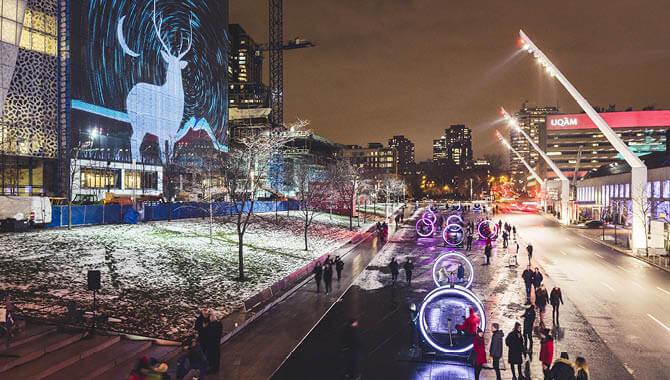 The centrepiece of the seventh annual Luminothérapie event, the Loop installation, will keep spinning its magic until January 29. In addition to the giant wheels on the Place des Festivals, there are two video projections: one on UQAM’s Président-Kennedy building and another on the Quartier’s brand new projection surface, Wilder Espace Danse.

To learn about the installation’s technological and technical elements, we went behind the scenes to speak with Simon B. Robert, the technology director of the Quartier des Spectacles Partnership, to discover what makes the open-air theatre tick. 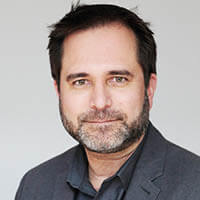 You lead the team that deploys all of the technologies used throughout the Quartier, and that oversees the operation of interactive installations within the district. Tell us about your work.

We have at our disposal a set of systems called the Urban Digital Laboratory (UDL). This is the Quartier’s nerve centre: it includes both electrical distribution and a major fibre-optic network. The UDL makes it possible to connect the video projection sites, the fountain in the Place des Festivals, sound and image transfers for the outdoor festival stages… From east to west, we also link the Quartier’s indoor venues to its public spaces, including recently added ones such as Place Émery, between Saint-Denis and Sanguinet streets. In an increasingly connected city, the Quartier des Spectacles is a practically limitless playground for creators, and it also enriches the experience for visitors.

How are you involved in Luminothérapie?

Luminothérapie is an annual competition in which a temporary work is selected by a multidisciplinary jury, of which I am a member. Once the project is chosen, we go into action. We serve not only as technicians but as advisors, to ensure that the final product is the best it can be. My team shares its on-site experience with the creators, making recommendations and reviewing certain aspects of the design. For Loop, we provided guidance for optimizing the video projections and the delivery of power to the illuminated wheels in the Place des Festivals.

There is a new video projection site this year: the east façade of Wilder Espace Danse, overlooking the Place des Festivals.

We worked with the architects to ensure that the all-glass façade would reflect light. We added a semi-transparent pattern to the curtain wall, allowing us to optimize the quality of the projected image. With the Wilder, we also opted for motorized blinds, which help us minimize interference from the building’s interior lighting. Our expertise has allowed us to enhance the experience for both visitors and content creators, who get to see their works under optimal conditions.

This is the first of our nine projection sites to make use of automated blinds, and it is also a world first. We’re only beginning to explore the creative possibilities opened up by this particular façade. We’ve also put out a call for proposals specific to the site (see sidebar). 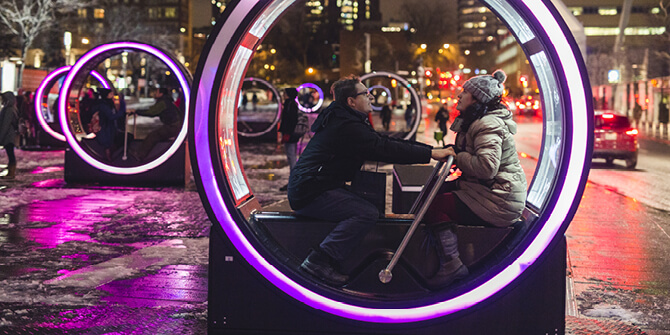 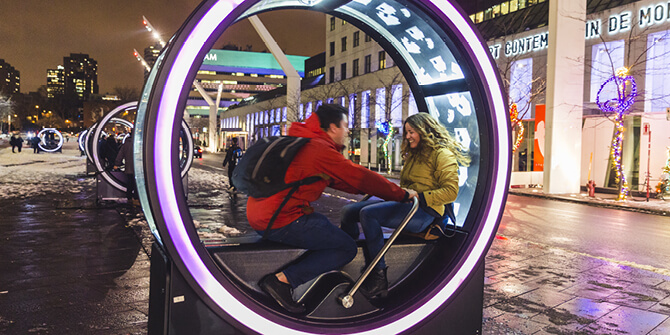 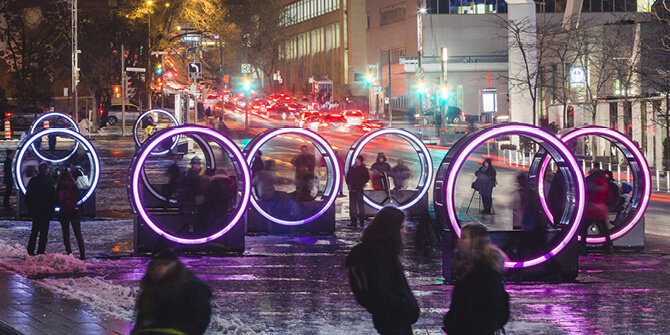 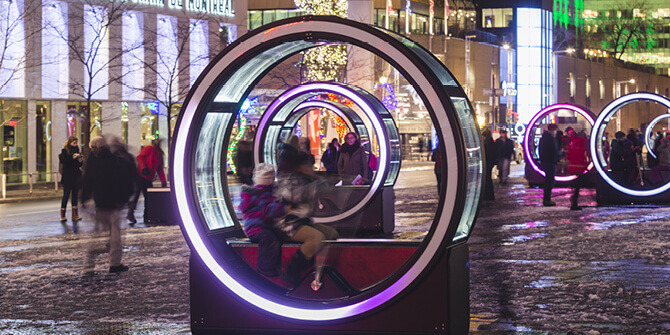 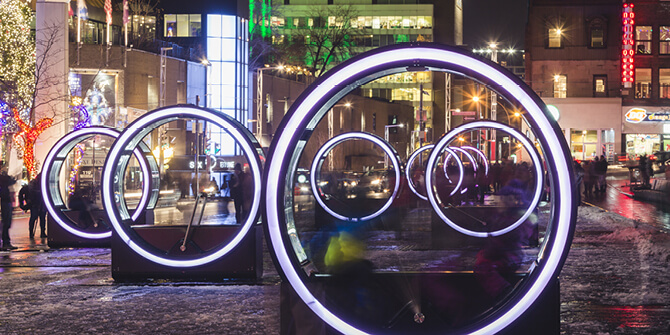 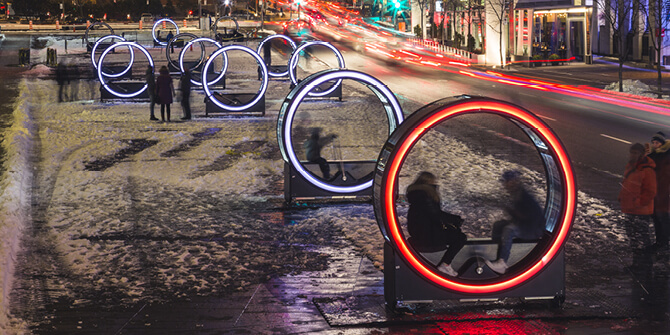 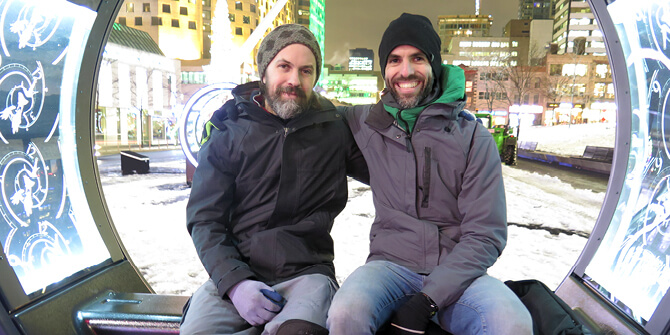 How do you bridge the technical and creative sides?

The UDL team is here to serve creators, partners and the public with leading-edge technology. Our fibre-optic network, for example, allows us to serve small streets that could one day be used as event sites. We imagine site-specific creative spaces. The Quartier’s proactive approach to technical innovation helped Montreal stand out and earn important points toward its application for status as a global Smart City, a distinction that it did in fact receive in 2016. Our team has strong technical knowledge in addition to a highly developed artistic sensibility. 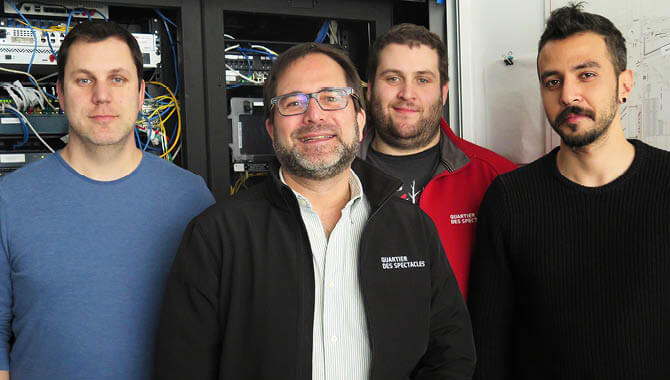 What does the Quartier des Spectacles’ technological future hold?

Everywhere in the world, people are looking for ways to improve the lives of city dwellers. We’re in the age of big data, and we want to measure different things: traffic density, air quality, the number of pedestrians at a given location. In the Quartier des Spectacles, we will be able to observe how people move in public in order to fine-tune festival setups, for example. In February, in collaboration with the City of Montreal, McGill University and the Université de Montréal, a sensor prototyping project will be carried out using our infrastructures. We are fortunate to be working with a great partner that helps us offer artists an exceptional platform: Christie, the Canadian manufacturer of high-quality projectors. That hints at plenty of fantastic projects for Luminothérapie in the future! 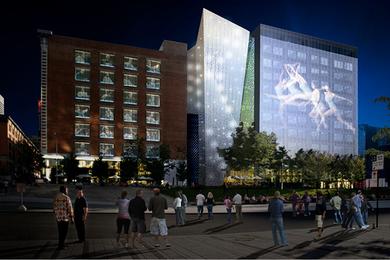 The east façade of the Wilder Building, facing the Place des Festivals, gives the Quartier des Spectacles a new projection surface, unique among its peers for its portrait orientation and glass surface. Canadian creators are invited to propose video projections celebrating the building’s focus on dance. The building is the new home of the Agora de la danse, École de danse contemporaine de Montréal and Tangente, which will soon be joined by Les Grands Ballets canadiens de Montréal. It will be shown regularly starting with the official inauguration of the Wilder Building in September 2017.
Deadline: February 6