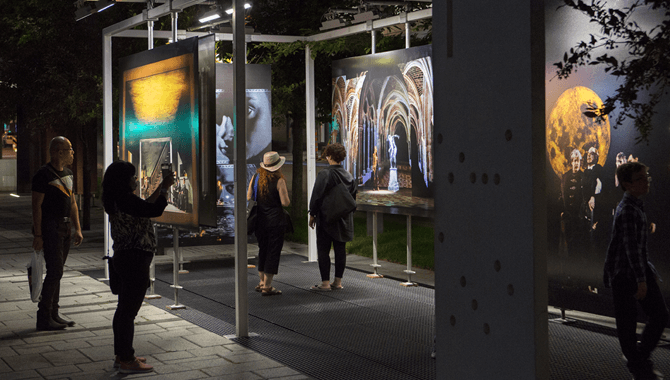 For 20 years, photographer Yves Renaud has been focusing on the characters in the plays staged at the Théâtre du Nouveau-Monde (TNM), capturing the ephemeral. To celebrate the theatre’s 65th anniversary, the Promenade des Artistes is hosting a display of 52 of his photographs in a show called Capturing the Moment (Fixer l’instant).

We spoke with Yves Renaud and with the TNM’s executive and artistic director, Lorraine Pintal.

Why did you choose to have a photo exhibition, and present it outdoors?

Lorraine Pintal: It was natural for us to do a retrospective of Yves’ photography, since he has been working with the TNM for more than 20 years. Thanks to the Quartier des Spectacles Partnership, we are branching out into the urban fabric, which is rare for a theatre. And it’s fitting that the show is on the Promenade des Artistes – we’re helping it live up to its name!

Yves Renaud: The idea is to present some key moments from the last 20 years, and also photographs that we happen to like. Revisiting the TNM’s last 20 years feels almost like archaeology! I’m really excited to be showing these photos outdoors. 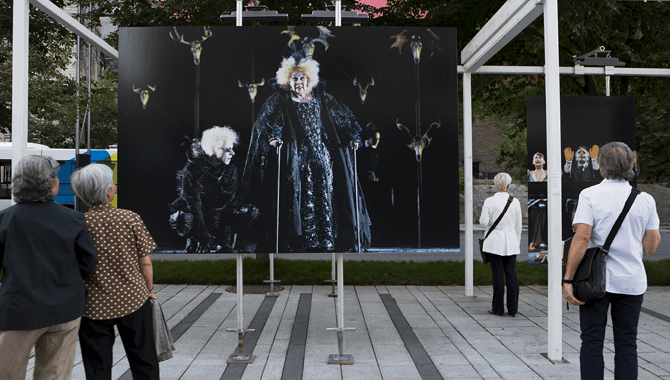 What makes a good theatre photograph?

Y.R.: You need to choose the right moments to photograph. The photo needs to show a complete action, so that the viewer can read it fully. I avoid close-ups: because theatrical make-up is exaggerated, close-ups can seem like caricatures.

L.P.: A good stage photo captures a moment at its most intimate, when an actor becomes a character, when emotion is on full display, when the lighting, makeup and costumes come together to form a work of art.

What does photography contribute to the theatre?

L.P.: Theatre is an ephemeral part, so photographs give works an “eternal” element. It’s the magic of being able to capture something invisible: a moment that will never happen again. Today, people like it when things are animated. Photography allows us to animate our own imagination ...

Y.R.: Sometimes, I feel a bit like an archivist. My work involves preserving memories. All that’s left when a play is done are the photos. The sets are taken down and the costumes are put in storage, but the photos remain.

How have the theatre and photography evolved over the last 20 years?

Y.R.: I was still working with film 20 years ago, so I took three times fewer photos. I took more time to choose the scenes I wanted to photograph.

L.P.: In Yves’ photos, you can also see the evolution of the production teams’ approach to lighting, sets, costumes, the way the actors wear their costumes.

In addition to the exhibition on the Promenade des Artistes, a book titled Fixer l’instant features 100 of Yves Renaud’s photographs. “We wanted to create a beautiful book, the kind you buy for the pure pleasure of it and that puts the photographs front and centre,” says Lorraine Pintal. “We published the book with the help of a crowdfunding campaign, and the response was very positive. It shows that people want to have a keepsake of those magical moments they saw on the stage.”