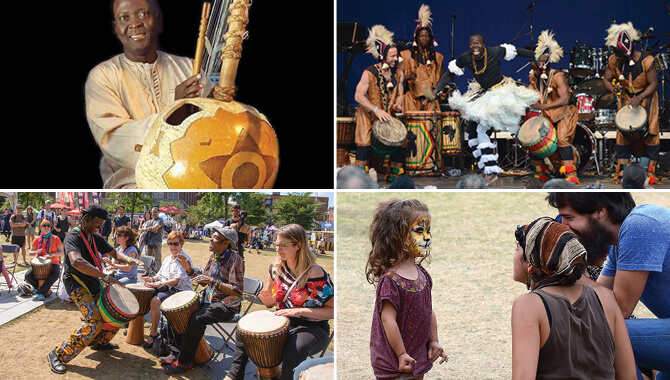 The Festival International Nuits d’Afrique de Montréal has come a long way in 30 years. Throughout the festival’s history, world music has been on the rise here and around the globe. The festival’s audience, drawn to the fest’s seductive African, Latin American and Caribbean beats, has kept on growing, making the event one of the biggest of its kind in North America.

As a way of celebrating that musical evolution and showcasing the pioneers as well as up-and-comers, Nuits d’Afrique has put together a knockout program for this year’s festival, July 12 to 24.

Frédéric Kervadec, the festival’s programming director, spoke with us about the event’s evolution, as well as some of the artists and activities to be found on the free outdoor site.

Nuits d’Afrique is turning 30 this year. How would you describe its changes over the years?

At the beginning, 30 years ago, the founders launched Nuits d’Afrique at Club Balattou, which is now a legendary venue and a pillar of the city’s world-music scene. Since 2011, we’ve had the good fortune to have our outdoor site on the Parterre in the Quartier des Spectacles, where we present a full program for all audiences, for six days. So we’ve come a long way in 30 years!

Also, we’ve often welcomed artists on their first visit to Montreal, and some of them have become regulars on the festival program. We’ve witnessed the evolution of world music, and we hope we have been a source of inspiration. The genre has modernized, become more accessible, and because it is such vibrant music, the audience has grown with us.

How is Nuits d’Afrique different from world-music festivals elsewhere?

First off all, we’re noteworthy for our longevity! This is one of the major summer events in North America, so we’ve been a gateway to the continent for several world-music artists. We’re very proud of that.

How has world music changed in the last 30 years?

It’s a very accessible genre that appeals to an ever-larger audience. People’s first instinct is often to think of traditional or ethnographic music, but today there’s a lot of fusion, hybridized styles, and the festival has been there for all of it. Today’s young musicians are playing thoroughly contemporary music.

Who is playing Nuits d’Afrique this summer?

What are some of the big indoor shows?

At the Métropolis on July 13, we will welcome a man who needs no introduction, Algerian raï master Rachid Taha. On the 16th, the top Haitian band Tabou Combo will share its high-energy music. We will present some more intimate concerts at the Gesù, including Spain’s Ana Alcaide (July 23) and our traditional Kora Night (July 24) with Morikeba Kouyaté and Zal Sissokho. This has always been a very popular show, because the kora is such an intriguing instrument.

The free outdoor site is even bigger this year, and it will be open for six days instead of five, from July 19 to 24. Here’s what you’ll find there.

• From mid-afternoon until evening, there will be free concerts on the outdoor stage on the Parterre. July 19, electronic band Mexican Institute of Sound will kick off the party. This is also where you’ll come to see Afrique en cirque, featuring ten performers, Les Ogres de Barback from France, Sierra Leone’s Refugee All Stars, Cuba’s Orquesta Aragon and, to close the festival, African superstar Meiway, the leading purveyor of Zoblazo music.

• The Timbuktu Market, which will transform the northern part of the Parterre with around 40 artisans and food stands.

• The site is expanding onto the Ilot Clark with the new Espace Agor’Afrique, including the Nuits d’Afrique sphere. Under a dome, the festival presents storytelling sessions and music workshops with traditional instruments, along with mini-concerts and DJ sets. Don’t miss the exhibition looking back on the festival’s first 30 years. The Children’s Village is also back this year on the Ilot Clark, with beautiful face-painting for the kids.