A walk through the Quartier des Spectacles 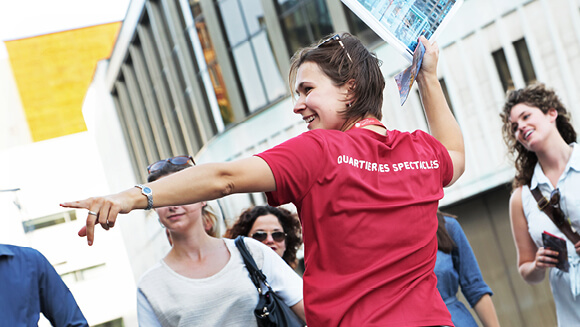 Experience a free walking tour of the Quartier des Spectacles through the eyes of a participant, Xavier K. Richard. This two-and-a-half hour excursion will astonish you as it explores the past and present of Montreal’s most cultural square kilometre. 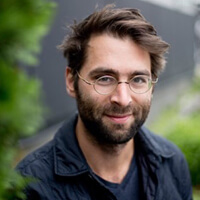 Sunday morning. Their morning coffee done, a small group of people are about to explore the Quartier des Spectacles, led by an enthusiastic urban planning student and graduate of the Institut d’hôtellerie et de tourisme du Québec.

Our small group includes a tall woman from Alsace and her Latin American boyfriend; a pair of Quebecers with a passion for the history of Montreal; and a solo woman who proudly declares her love for “being a tourist in my own city.” And this guided tour of the Quartier des Spectacles is the ideal way to learn all about the stories and legends woven into the fabric of these streets.

Starting point: the Place des Festivals and its many ‘firsts’.

The introduction to the tour is worth the trip in itself, helping us put the massive planning and redevelopment project in historical context. Gone are the days when downtown was first and foremost a place to go to work, shutting down every night until it was time to start all over again. We are now in an era of rapid densification. Today there are 12,000 permanent residents in the Quartier des Spectacles and 85,000 in Ville-Marie, the borough that encompasses all of downtown Montreal. In addition to the Quartier’s residents, in 2014 some 1.8 million people attended the Quartier’s 30 performance venues. And that doesn’t include all the festivalgoers and patrons of the Quartier’s many bars and art galleries.

On the Place des Festivals, our guide reviews the history of firsts that happened here. From the first big, free cultural gatherings in the 1980s, to the first steps to create the Quartier des Spectacles in the early 2000s, to new projects now underway like the Wilder Building’s Espace danse and the Balmoral block, the future headquarters of the National Film Board of Canada overlooking the Place des Festivals.

Sometimes, you need a guide to remind you to look up.

Our guide, Marc-André, points out a work that no one in the group had ever noticed before. Perched atop the Musée d’art contemporain de Montréal, La Voie lactée is a photograph of artist Geneviève Cadieux’s mother’s lips. Still in the Place des Festivals, while we are still admiring the artwork we happen to see famous conductor Kent Nagano crossing the square with his family. The members of our group are delighted. We are as close to the heart of the Quartier’s action as we can get.

Next, we make our way to the nearby Promenade des Artistes, behind Place des Arts, begun in 1963 as the first major cultural project of the Quiet Revolution. We learn that the project was controversial: some complained that it would serve only the rich. An indeed, in those days art and culture were considered luxuries. The minimum wage was 63 cents an hour, while opera and concert tickets cost from $8 to $15. In 1964, ultra-popular singer Claude Léveillé filled the big hall’s 3,000 seats, proving that art could also be accessible to the ordinary person.

Anecdotes and discovery: the tour continues.

We pass the Maison symphonique, the Théâtre du Nouveau Monde and the Monument-National for a crash course in Quebec history and some exciting moments on the iconic theatre’s stage. Next stop: Place de la Paix, next to the dome of the Society for Arts and Technology (SAT) and the 2-22 building. Taking the time to linger, look around and listen, the group hears interesting facts and anecdotes, as entertaining as they are educational, such as “Montreal is the world’s only city where the sun sets in the north,” or “This is our ‘Yes we can’ building.”

Behind the patio at the Foufounes électriques are the Habitations Jeanne-Mance. In this green oasis, we learn about the origins of the project, which was proposed by mayor Drapeau in 1959. The mayor wanted the city’s slums cleared before the universal exposition – Expo 67 – and lobbied to have a new broadcast centre built here, a project that was eventually built in the Faubourg à m’lasse. Some surprising facts: the Habitations are home to 2,000 people of 70 different ethnicities living in 800 affordable housing units. The site also has some 400 trees.

At the end of the tour, from the Université du Québec à Montréal to the Grande Bibliothèque and lastly Les Jardins Gamelin, the group is directed to a small street. We return here every week, and this is the first time we have seen the Allée des bouquinistes, where four booksellers open their stalls on summer weekends. It is located on the west side of the Grande Bibliothèque.

So much to see, explore and discover!

YOU CAN MAKE A RESERVATION BY CLICKING HERE.

Private tours for groups can be organized on request.

Head out on a discovery of the major events that have shaped the urban fabric and spirit of the Quartier des spectacles, from the Red Light era to its recent transformation into a vast outdoor theatre.