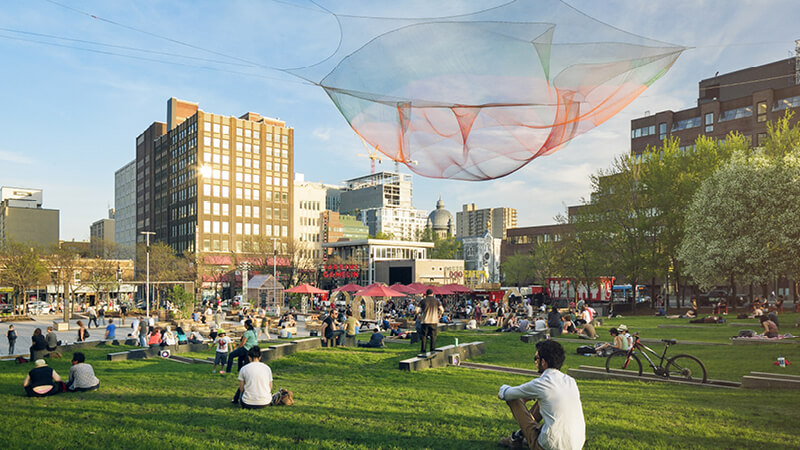 Last year, during the inaugural year of Les Jardins Gamelin, the Quartier des Spectacles Partnership wanted Montrealers to embrace a neglected public space and give them a desire to keep coming back, while co-existing peacefully with the space’s long-time users. Attracted by a diverse, non-stop program of events and activities and an inviting, green design, the public responded to the temporary arrangement with great enthusiasm. For its second year, Les Jardins Gamelin returns with the same winning recipe, plus some new features.

“The site’s design, from the patio to the illuminated sign to the snack bar and small stage, gave the Jardins a strong identity,” says Ms. Daigle. “We’ve put together a similar arrangement this year, because we wanted people to come back to ‘their’ space. The vegetation went a long way to making the space welcoming, and this year the site has even more planters.”

Urban agriculture is a defining feature of Les Jardins Gamelin and the team from Sentier Urbain, which is in charge of this aspect, have an even stronger presence this year, with two people dedicated to the activity all summer. “Visitors are curious and come to ask questions,” says Ms. Daigle. “There are workshops every Sunday at 11 a.m. Families are particularly welcome, since the workshops are designed for all ages.” In the space’s many planters, visitors can find edible plants from Quebec’s agricultural heritage, aboriginal farming techniques and plants used for making dyes.

“Each visit to Les Jardins Gamelin is different from the last. The experience is always being refreshed,” Ms. Daigle says. “It’s important that Montrealers use this space, but it is equally important that all kinds of artists embrace it.” In 2015, there were a total of 230 activities.

Among this year’s some of the new features are Les jeudis de…, a series for established artists like Peter Henry Phillips, Jérôme Minière or SoCalled to have the run of the stage. A musical lunch featuring by women behind the turntable has been added: the Miss DJ series. The Concert découverte series showcases up-and-coming artists, including the Révélation Radio-Canada with Laurence Nerbonne and Ilam.

Returning for this second year are such popular activities as the Soul Lunches presented by DJ Andy Williams, Salsa Folie every Saturday night and Sunday afternoon karaoke. “If you love dance, go see our Salsa night. It’s amazing to 300 dancers fill the space. Everyone is invited to dance and the atmosphere is hot!”

Sundays afternoon are for families. After an urban agriculture workshop with Sentier Urbain, parents and kids are invited to participate in Family Sundays which include theatre, circus, music and games. At 3 p.m., there is kids’ karaoke! Lastly, thanks to Radio-Canada there will be three Quebec movie nights! Starting with La passion d’Augustine on June 18.

Art has a special place in Les Jardins Gamelin. When the night comes, the video projection 9 x [MTL] is presented, and for another year the sculpture by Melvin Charney is illuminated. The iconic work by Janet Echelman, 1.26, is once again floating over the site. “1.26 made a deep impression on people last year,” Ms. Daigle notes. “It gave colour to the Jardins and piqued people’s interest. Many people visited just to see the work.”

For this second edition, the Jardins’ snack bar, housed in a repurposed shipping container and open daily from 7:30 a.m. to 11 p.m., has a new operator. Chef Dominic St-Laurent and his team from Ballpark restaurant are serving a diner-style menu. Accompany your cheeseburger, Sloppy Joe or gourmet poutine with fresh-squeezed juice or a cocktail created by mixologist Marc-Antoine Phénix. For the early risers, blueberry pancakes, granola, PB&J toast are served from 7:30 a.m.

Even with an already packed schedule, the Quartier des Spectacles has left some time slots free so it can spice up the program with surprise additions all summer long!

This major redesign of Place Émilie-Gamelin is once again made possible by the support of the Ville de Montréal and the borough of Ville-Marie, the participation of community and neighbourhood groups including UQAM, BUSAC Immobilier (owner of Place Dupuis) and Warner, and the contributions of cultural partners who demonstrated a deep commitment to the project throughout the 2015 season and this year again.