Luminothérapie: the making of "Impulse" 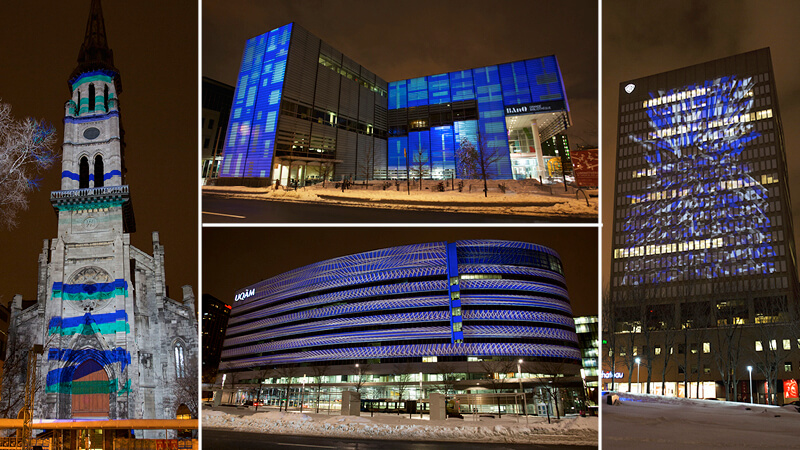 Until January 31, Impulse, the centrepiece of the sixth annual Luminothérapie event, is sure to attract increasing numbers of Montrealers, thanks the illuminated musical seesaws in the place des Festivals, as well as the mesmerizing architectural video projections. To learn more about the making of these extraordinary luminous creations, we spoke with the people behind the music and visuals being presented at the nine permanent projection sites in the Quartier des Spectacles.

We met the three creative minds behind Impulse: video producers and digital artists Mathieu Le Sourd and Daniel Iregui, and composer and sound designer for the seesaws and the videos, Mitchell Akiyama.

After learning about the luminous installation being created for the place des Festivals, how did the video projection portion of Impulse germinate in your minds? What were your inspirations?

Mathieu Le Sourd : To create the videos, Daniel and I focused on the motion of the seesaws. Horizontality, symmetry, equilibrium and disequilibrium were our guiding concepts. We also wanted to play with the architecture of each façade to create movements that would give the buildings life.

Daniel Iregui : In the same spirit as the design of the seesaws, we were looking for a minimalist, monochromatic aesthetic. As Mathieu explained, the concept of equilibrium and disequilibrium really inspired us. What is also very interesting about the installation in the place des Festivals is that when a seesaw is not in use it stays horizontal and balanced rather than tipping like a traditional playground seesaw. The horizontal lines repeat. The architecture of each building, as well as its location and function, also influenced our thinking.

Mitchell Akiyama : I was immediately inspired by the straight lines and minimalism in the drawings by architects Lola Sheppard (Lateral Office) and Conor Sampson (CS Design). Before working on the musicality of the seesaws, I composed nine soundtracks, one for each video projection. I worked with synthesizers with four different tonalities. Then I simplified that same music to create the sound of the seesaws.

How did you work together to bring the music and the video projections together?

D.I. : Mitchell’s music not only inspired the creation of the video projections, it actually dictated our process – the music was written before we produced the videos. The idea was to allow viewers visualize the sound. The image reacts as the notes change. So in this case music is much more than a simple soundtrack.

M.L.S. : Sound is one of the project’s central elements. To create videos for the four façades I was working with, I analyzed the frequencies of the different tracks to generate visual content based on the sound. So we each developed software that connects visual data to music in real time.

M.A. : Before composing, I watched what Mathieu and Daniel had made in the past to imagine what they might make based on my music. In the end, we worked with the same source files, the same beats. While I was composing the music, I didn’t realize that, in a way, I was also composing part of the videos!

What challenges did you face during the creative process?

M.A. : Each of the nine pieces I composed had to run five minutes. It’s difficult to create a natural musical curve when you have that kind of time constraint. It was a fascinating challenge! I also had to think about the fact that the music would be played outside, in cold weather. I needed the creations to reflect that aspect without being too cold, so I tried to add a bit of warmth to the synthesizer sounds.

M.L.S. : Every façade we are working with has a different size and shape. And depending on the viewing position, we see something different. So I had to create software to allow us to test different points of view. At first, we wanted to work only with black and white. But black doesn’t work very well, because it eliminates the magic of the architectural projection, whereas it works quite well when we watch the projections indoors. We eventually settled on blue, cyan and white, so as to have a uniform colour palette everywhere.

D.I. : It’s a big challenge to create projections for a building façade. You have to find the right balance between the shape of the building and the concept of the projection. Because there have already been several video projection projects in Montreal, it was essential to come up with something original!