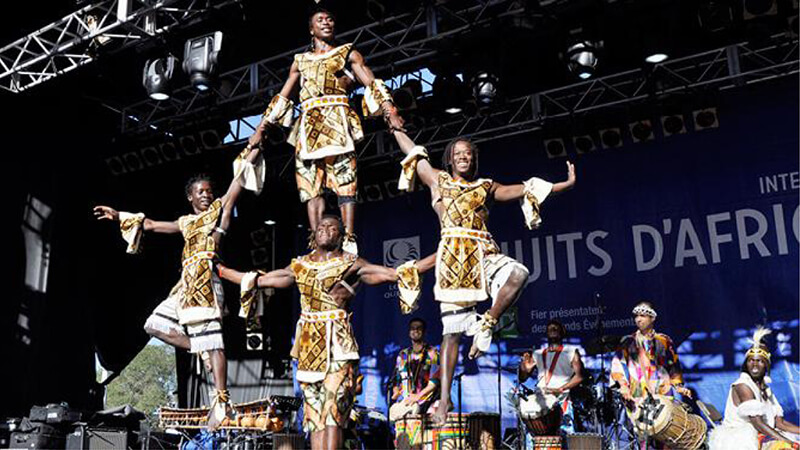 After 29 years, the Festival International Nuits d’Afrique should need no introduction, but it’s still worthwhile to note that for three decades, the festival has been welcoming some of the best performers in world-music. This summer, in addition to its usual excellent line-up of indoor shows (until July 19) and outdoor events (starting July 15), the festival is presenting a wide variety of workshops and activities for the whole family, mainly in the Kids’ Village and the Timbuktu Market. In other words, Montreal is heating up and putting on African colours!

Frédéric Kervadec, the festival’s director of Canadian and international programming, spoke to us about Nuits d’Afrique’s highlights:

The definition of “world music” seems to change from year to year. Does that have an impact on which artists the festival invites?

“The definition of ‘world music’ has always been fluid,” Mr. Kervadec says. “Even so, the term has always referred to changing musical genres. It has always included a very traditional side and a more modern one. But today there are fewer boundaries than ever between the two sides, and the new generation is more inclined to blend styles,” he continues, noting that the popular designation “World 2.0” includes elements of pop, hip-hop and funk. Artists who will give free outdoor concerts, such as Guadeloupe’s Admiral T or Ottawa’s Le R, represent the new generation that loves to mix things up, much to listeners’ delight. “World music is constantly evolving. Our challenge is to stay up to date, reflect that evolution and bring people along for the ride,” he says.

Can you recommend an essential eew world music show and a more traditional one?

“Don’t miss Le Grand Méchant Zouk, featuring Kassav’, Luc Léandry, Jean-Marc Ferdinand and Shoubou, the leader of the famous Haitan band Tabou Combo, on July 12 at Métropolis. Zouk is a thoroughly irresistible musical style, invented by the band Kassav’ in the 80s, which caught on around the world.” Fans of more traditional sounds will want to head down to the Gesù on July 10 for La Nuit de la kora, with two excellent kora players, Diely Mori Tounkara and Guinean artist Djeli Moussa Diawara, the world’s only player of the 32-string kora.

Outdoor concerts are one of the festival’s strengths. What surprises are in store for 2015?

There are outdoor concerts every day from July 15 through 19, from the middle of the afternoon until the main event, which starts at 9:30 p.m. The nightly concerts – five in all – are absolutely not to be missed. “You have to hear Chico Trujilo, a Chilean band combining cumbia and alternative music. The reggae and dancehall singer Admiral T put on an incredible show at the National last year, and we’re excited to have as many people as possible see him this year. The Brooklyn-based band Antibalas is well known for its important contributions to Afrobeat. Los Van Van is another very famous band, who’ve earned the nickname ‘Cuba’s Rolling Stones.’ Lastly, the closing concert, put together for the occasion by Afrique en cirque and Les productions Kalabanté, features acrobatics, dance and music,” Mr. Kervadec notes enthusiastically.

Aside from music, how does the festival showcase African culture?

“For several years, the festival has presented an ever-growing number of participatory activities that help people discover the many peoples of Africa through musical workshops or through food,” he says. “We really want to create an African oasis in the heart of the city, on the Quartier des Spectacles Parterre, so that festivalgoers can immerse themselves in African culture.” For the occasion we will have a Kids’ Village, with workshops daily from noon to 5 p.m., and the Timbuktu Market, with artisans from every part of Africa and their beautiful creations. We have free workshops to introduce people to African dance and percussion with artists such as Aboulaye Koné, on the balafon. There will also be free Gumboot and samba dance lessons.” Mr. Kervadec also reminds us that there will be patios where festivalgoers can enjoy African and Jamaican food, to add to site’s unique atmosphere. “This year we’ve added the Agor’Afrique TV5 , a space where the public can meet the festival’s artists, listen to stories or participate in workshops.”