Choose your own comedy adventure at Just For Laughs 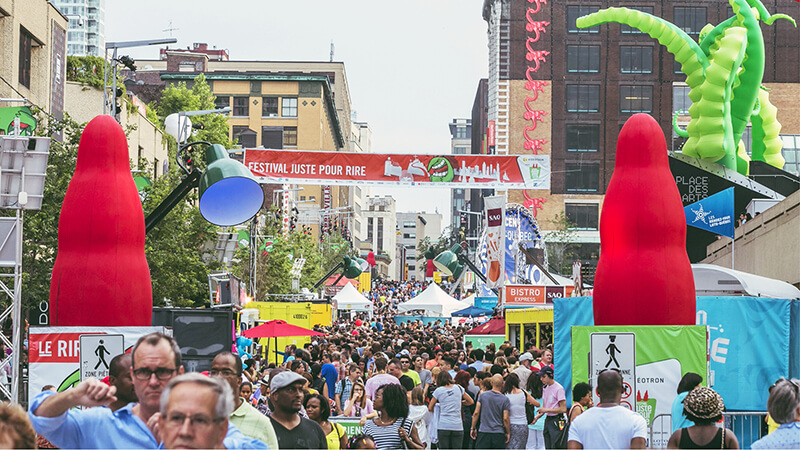 Since 1983, Montreal’s twin comedy festivals, Juste pour rire and Just For Laughs, have been doling out huge summertime doses of the world’s best comedy, including countless up-and-comers who have gone on to become big stars – many of whom keep coming back after they’ve become household names. This year’s festival is bigger and better than ever, with more than 200 different shows from July 8 to 28. There’s truly something for everyone!

We spoke with Robbie Praw, the Vice-President of Programming at Just For Laughs, about what makes the world’s biggest comedy festival the world’s best event of its kind.

What are some of the highlights of this year’s festival?

Most of our big events are happening in the Quartier des Spectacles, at Place des Arts. This year’s line-up is by far the biggest we’ve ever had – it’s massive – and we’re going to have our first free outdoor mega-show in English since we moved to the Quartier: “Weird Al” Yankovic, on July 21. “Weird Al” just won the Grammy for Best Comedy Album, and we’re really proud to be able to present him for free on the big outdoor stage in the Place des Festivals.

Some other highlights include some huge events at Place des Arts. We have our usual big galas, which are seen on TV all over the world. This year our top host is Neil Patrick Harris, who hosted the Oscars this year and has hosted the Tony Awards many times. You can only see this gala in Montreal, in the Quartier des Spectacles. We’re very excited. We also have terrific galas hosted by Patrick Stewart from Star Trek and the X-Men movies, and Jane Lynch from Glee.

What about stand-up comedy?

We have one of the world’s most popular stand-up comics, Dave Chappelle, who was last here two years ago – he’s one of those stars who got his start here when he was 19. He’s back with a phenomenal stand-up show, and he’s already slated to perform eight sold-out shows and we added a ninth one.

Tell us about some of the local connections to the festival.

Two of our most popular events every year are the Nasty Show and the Ethnic Show. This year both of them have strong Montreal connections.

People love the Ethnic Show because there’s nothing that says “Montreal” more than all of our many ethnic backgrounds, and this show speaks to them – the Arab, Jewish and Italian communities, among others. This year, one of the performers is Rachid Badouri, who’s a huge star with francophone audiences, and we’re delighted that he’s going to cross over and join us for the Ethnic Show.

What about the Nasty Show?

This is our oldest theme show and it’s very, very dirty! It’s extremely popular because people just love filthy comedy! And our host this year, for the first time, is Mike Ward, another big francophone star.

Would you say you’re going the extra mile for bilingual Montrealers?

Absolutely! We’re trying to make our festival one that Montrealers of all walks of life can enjoy. Of course, our shows are in English, but there’s a huge community of bilingual Montrealers and we want them to know that we’re so lucky to have the world’s biggest English-language comedy festival in our primarily French-speaking city.

English comedy is a huge trend right now, and it’s important that the whole community realizes that not only do we have the world’s best French-language comedy festival, but we also have the world’s biggest and best in English, with the biggest stars in the history of comedy year after year. That’s something Montrealers can be really proud of, and we hope to see everybody on the streets and in the venues for our festival.

You’ve mentioned the big stars, but word on the street is that this is also the place to see unknowns who are going to be the next big stars… Who are some up-and-comers we should watch for?

Everyone asks this question and I always tell them that everyone we book is here because they’re a unique voice in the big world of comedy. And it’s not like music festivals, with separate ones for rock, country, jazz… there are a ton of different kinds of comedy and Just for Laughs brings all of them together. We all are different and something that makes you laugh is not necessarily going to make someone else laugh. People need to choose their own adventure. If you’re interested in young women comedians, ethnic comedians, African-American comedians, gay ones, straight ones – we’ve got plenty of all kinds. With over 200 different shows, I simply can’t name just one or two key ones!

For any given person, I sincerely believe that your favourite comedian ever is at the festival this summer – I just don’t know who that is. It’s 100% made-to-order comedy, no matter who you are.

Read our blogue about Juste pour rire and the outdoor events.