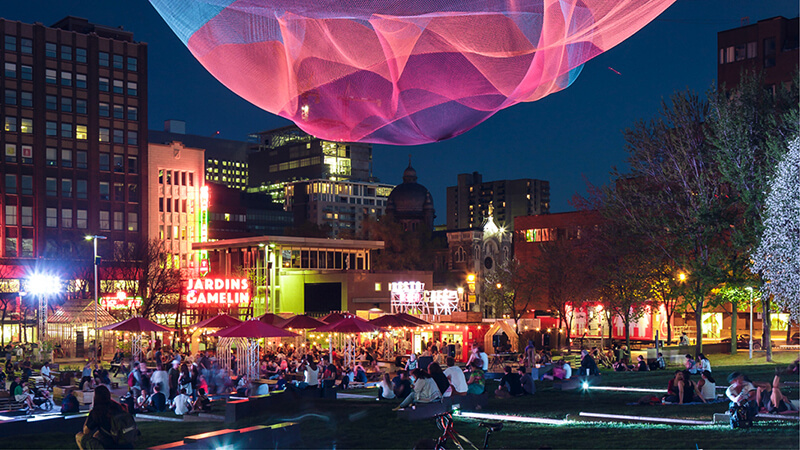 Place Émilie-Gamelin will be livelier than ever over the next few months. As part of an unprecedented revitalization program, the Quartier des Spectacles Partnership and Pépinière & co. designed Les Jardins Gamelin, a temporary setup intended to turn this under-appreciated space into a prime destination. Seven days a week until October 4, the space will feature cultural and citizen-oriented programming. With its large patio, restaurant and bar, and urban agriculture zones, Les Jardins Gamelin is sure to be a much-loved downtown oasis.

Jérôme Glad of Pépinière & co. and Pascale Daigle, programming director for the Quartier des Spectacles Partnership, spoke to us about Les Jardins Gamelin, the concept behind it, how it works in practice, and the many activities to be held there. 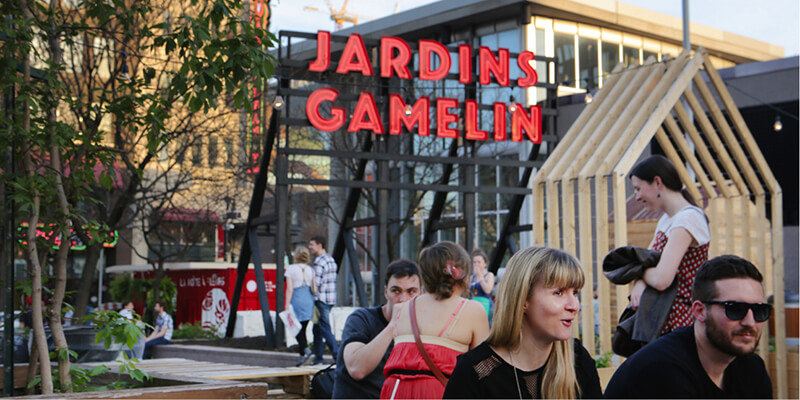 It’s a not-for-profit organization that works on urban revitalization projects, from site design to management and programming.

How did Les Jardins Gamelin come into being?

The Quartier des Spectacles Partnership approached us to work together to come up with ways to revitalize Place Émilie-Gamelin. We looked at both the layout and programming to bring life to the site and encourage Montrealers, including those who work in the area, to embrace and use the space.

What are the project’s inspirations?

Unlike European squares, typically surrounded by buildings that bring life to the space, Place Émilie-Gamelin is turned inward on itself. So we wanted to add kiosks to breathe new life into it. The one with the bar and restaurant is central to the project. Bryant Park in New York City gave us a lot of inspiration. That park is located downtown and was transformed from an undesirable space into a very well used park. It has become a natural gathering place. That was our wish for Place Émilie-Gamelin.

Les Jardins Gamelin is above all about citizens and the community…

Absolutely. We drew inspiration from the kind of social and community projects that are springing up all over North America and that often have a strong focus on urban agriculture. We knew that we were working in a sensitive part of the city, beset with social problems. We, the Partnership and the Borough of Ville-Marie shared the desire to turn the site into a driver of change, with the participation of the existing marginalized populations. Local organizations are involved in the project, and urban agriculture will help them connect with their clients. 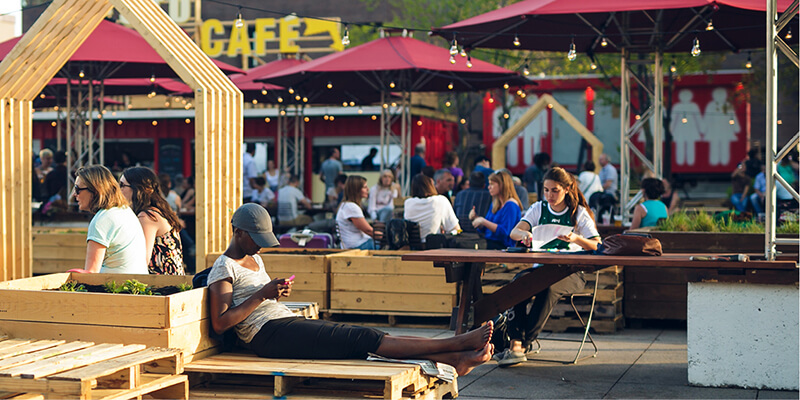 Why is a temporary redesign preferable to a permanent one?

By making it temporary we can test the concept at a lower cost and then make any necessary adjustments, which makes the project participatory and flexible. By staying alert to how people respond, we will be able to think of ways to make the project as relevant as possible in the long run, and eventually develop a permanent concept.

Pascale, how is this year’s programming for Place Émilie-Gamelin different from past years?

The biggest difference is that we will use the space full-time, seven days a week. The patio, restaurant and bar, artworks and cultural and citizen-oriented activities all combine to bring the site to life. Not to mention the festivals that will use the space, including OFFTA, Montréal complètement cirque, Montreal Pride, Festival international de la littérature, Festival Montréal Country, and Piknic électronik. There will also be one-off events, such as Différents comme tout le monde and the Culture Montréal picnic. We’ve received many requests from event organizers, and we’re very pleased that there’s so much enthusiasm for the project! 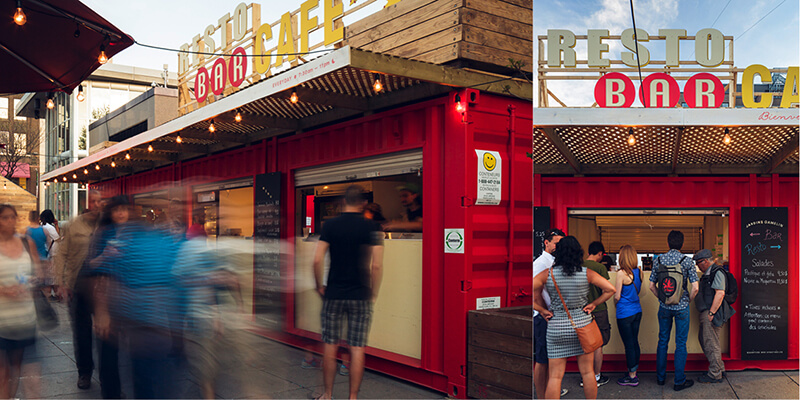 Why is this space so important for the Quartier des Spectacles?

Place Émilie-Gamelin is a central space in the city and a gateway for tourists, so we want people to embrace it. To get Montrealers to reclaim it, we needed a major effort with the involvement of important players like the Borough of Ville-Marie, the police, and the community organizations. And that’s what we’ve done this year! Enormous effort went into collaboration and coordination. It was important to have a shared vision to make sure we are all on the same page. The result is a project with a reach and impact far beyond the cultural component. Even though Les Jardins Gamelin officially opened just a few days ago, we are already seeing a very positive change in the general perception of the site.

What has been done to ensure harmonious coexistence among different users of the space?

Les Jardins Gamelin is designed to be shared by different groups of people. It is not about excluding anyone. We are actively trying to include homeless people with activities designed for them.

What’s more, homeless people tell us that they appreciate the new atmosphere and the presence of different people, because the site is safer now, even for them. Make no mistake, there are only a few troublemakers…

We are also working in collaboration with the Borough of Ville-Marie, which has established an intervention plan, including, among other things, on-site community workers.

Also – and this applies to the Quartier des Spectacles as a whole – the Partnership has adopted a hiring policy with a strong workforce reintegration component. Since 2010, most street-level positions have been filled by people in difficult situations. Two of three site managers for Place Émilie-Gamelin have a history of homelessness. So they are very familiar with the site’s long-time users and have helped us build bridges. 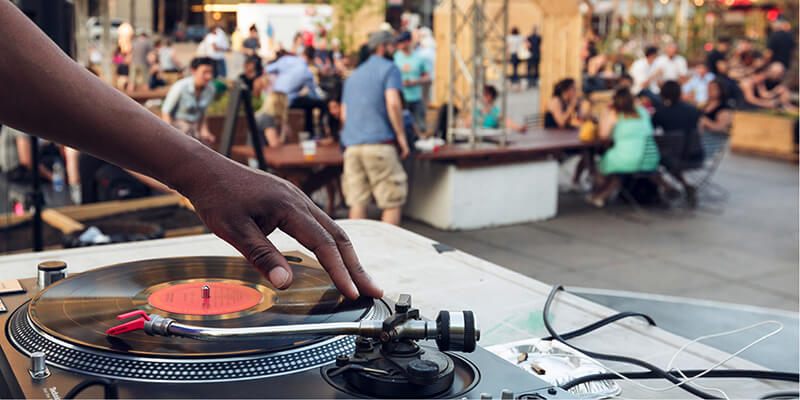 What are the programming highlights?

In between festivals, we are hosting recurring activities such as Sunday karaoke; the Agora libre public debates on Mondays; spoken-word poetry with slam Tuesdays; up-and-coming musicians on Saturdays; Alors on danse on Monday evenings, with free dance lessons; the l’Escalier lunchtime concert series on Wednesdays; and soul lunches with Andy Williams, the DJ from The Goods Soundsystem…

The urban agriculture component is run by Sentier urbain, which will host discovery sessions on Thursdays and theme workshops on weekends. 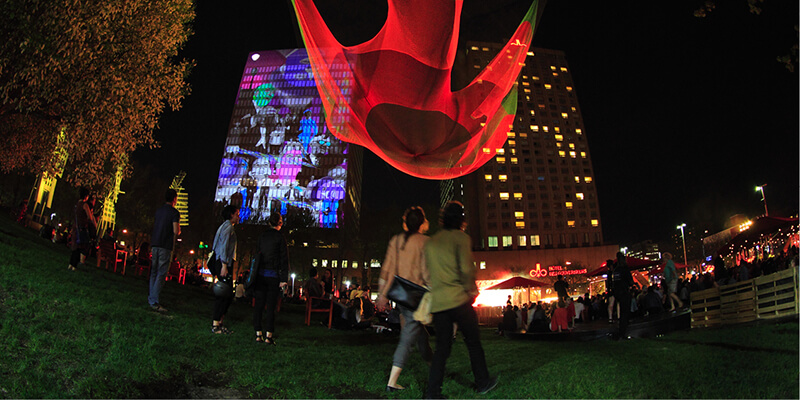 The enormous sculpture 1.26 by American artist Janet Echelman is hanging over the site, and it changes with the shifting wind and light.

Exactly. The work creates a majestic suspended ceiling for the site. It is very impressive both during the daytime, and at night when it is illuminated. It is in keeping with the mission we have given ourselves: presenting powerful public art that transforms our relationship with the city. The illumination of 1.26 is coordinated with that of the sculptures by Melvin Charney. Also, Place Dupuis is a projection site for 9 x [MTL], adding to the nighttime ambiance in true Quartier des Spectacles style.