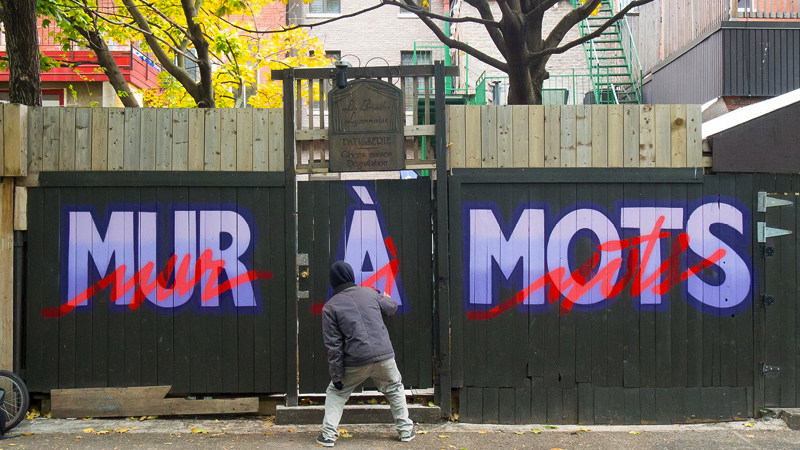 After creating more than 60 murals in Montreal, including nearly 20 in the Quartier des Spectacles, the MU organization can be proud of having fulfilled its mission of beautifying the city and promoting social change in the places where it is active. But MU’s work is far from done: its director wants to transform Montreal one wall at a time, with 100 murals. Last week, eight new murals were unveiled on Savoie Avenue – commonly known as l’allée des bouquinistes (booksellers’ row) – behind the Grande Bibliothèque.

We spoke with Elizabeth-Ann Doyle, the co-founder, executive director and artistic director of MU.

How does a new mural help spark local action?

Let’s take the example of the Habitations Jeanne-Mance, where we’ve created no fewer than 12 murals. It’s fair to say that 10 years ago this was a housing project that people went out of their way to avoid passing through. Today, it’s a distinctive, recognizable residential area. Even tour buses stop so people can take photos! There’s less litter, less vandalism. Perceptions have been changed, and the artworks contributed to that. Beauty attracts more beauty. Our murals are often the first in a series of beautifications. We inspire residents to take pride, and then they start taking better care of their surroundings. Wherever we work, we invite local people (residents, merchants, landlords) to get involved.

How are MU’s projects different from other murals?

We take a social-art approach, which means that values like education, inclusiveness and sustainability are all integral parts of our mission. MU is a charitable organization whose mission includes an educational component. We hold art workshops for young people aged 13 to 17, with several goals: encouraging teens to stay in school, artistic expression, citizen impact on public space, exploration of artistic professions. For each mural created in a public space, we paint another in a community centre, youth centre or day camp. We also have paid positions for a dozen art students every summer.

What is your hope for mural art in Montreal?

Montreal is not the city with the most murals. Philadelphia and Lyon, to name just two, are both far ahead. But we can easily become the mural capital of Canada. Montreal is known as the city of 100 steeples – I want people to call us the city of 100 murals! We have already gone well beyond that number if you count every initiative in the city, whether legal or not. But I would like MU to reach 100 completed murals. That is my goal for our legacy, especially with 2017 coming up soon [marking the end of the cultural metropolis action plan and the city’s 375th anniversary]. I want murals to be recognized as one of our city’s many signatures. Culture doesn’t start and end with official venues. We also need permanent public art that people can appreciate every day. And the Quartier des Spectacles is successful at creating that balance. We often wonder what to do before a show. Why not do a public-art walk?

Which are your favourite murals in the Quartier des Spectacles?

First, the group of 12 murals (6 painted, 6 mosaics) in the Habitations Jeanne-Mance. We worked with residents and really made a positive change in the area.

Next is the TNM mural. Because it’s beautiful, and especially because it’s innovative, with lighting that brings it to life at night. In general I’d like it if we illuminated more of our murals.

Lastly, the work about Paul-Émile Borduas on the square of that name (the former Émery alley). It’s the first mural in our series of tributes to Montreal’s cultural builders, which now has 10 murals in all. The Borduas mural was an important driver of change in the Quartier Latin. The alley felt unsafe, and it was frequently vandalized. The mural opened the way to revitalization initiatives (rehabilitation, new street furniture and lighting, authorization to create patios). All of that demonstrates that our projects work.

We have just completed a new series called Mur à mots, which includes eight murals. The goal is the same as ever: revitalize the area, change perceptions, bring life to the street and create a more interesting and less unsettling place to go in the eastern sector of the Quartier des Spectacles, which is increasingly a destination in its own right. The eight murals, by 11 up-and-coming artists, are a tribute to literature. Among others, there are nods to Joséphine Bacon and Rumi, while Dany Laferrière is now part of the cultural builders collection. 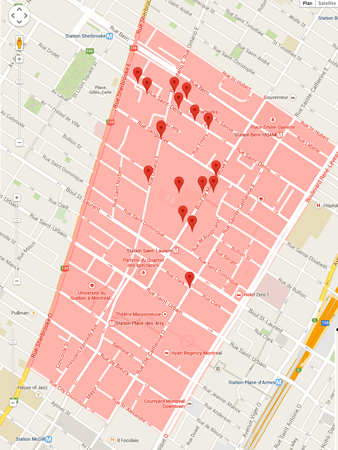