BOUILLON BILK: CREATIVITY ON EVERY PLATE

In less than two years, Bouillon Bilk has established a solid reputation as one of the finest tables in Quartier des Spectacles, and even all of Montreal. And yet that happy result was far from guaranteed at the outset. Sandwiched between two electronics stores on a block of St. Laurent Blvd. that was not especially busy (between Ontario and De Maisonneuve), it was the first restaurant opened by chef François Nadon and maître d’ Mélanie Blanchette. Both had nearly 15 years of experience in the restaurant business – he at Brontë and she at Leméac, among others – and both had plenty of passion leavened with humility. Starting from almost nothing, they have established their restaurant as a must-visit for tourists, people who work in the Quartier and people who are in the area for a show. Such is the restaurant’s success that Bouillon Bilk might already be considering expanding.

We met Mélanie Blanchette, one of Bouillon Bilk’s two partners. 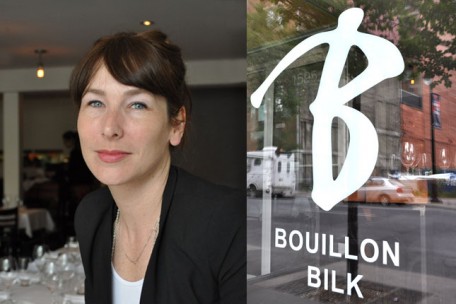 Why did you decide to open in the Quartier?

I’d be lying if I said we were visionaries who smelled an opportunity. In fact, the search was very complicated and in a way we wound up here by default. A friend had a sandwich shop here and suggested we take over his space. We didn’t have a lot of money and it was already equipped, so we took it, telling ourselves we’d go through our growing pains here and move on once we were established.

The area was a bit depressing at the time. The Maison Symphonique wasn’t finished, and the site was surrounded by hoardings covered with posters and graffiti.

In the end, the absurdity of the location worked in our favour: people felt as though they’d found a rare pearl, and so they adopted us. Because they weren’t expecting much at first, they were in for a big pleasant surprise.

And then, one morning, we got to work and the Maison symphonique was finished. From then on, we knew we were going to stay. At night the view is magnificent, with the video projections on the nearby UQAM building, among other things. Because the interior is fairly plain, all eyes are on the show going on outside.

And your formula seems to be working well in the Quartier…

We decided to put delicious and beautiful, yet very simple, things on the plate. Even if there’s something very sophisticated on your plate, made with top quality ingredients and carefully considered combinations of flavours and textures, we didn’t want it to feel like a super fancy experience. It is important to us that the restaurant be warm and inviting. Over the course of an evening, you will see ladies in evening gowns on their way to the opera, sitting next to a couple in ripped jeans on their way to a rock concert at Métropolis. That means that a lot of different people care about our food and that we have succeeded by staying accessible to different kinds of diners. 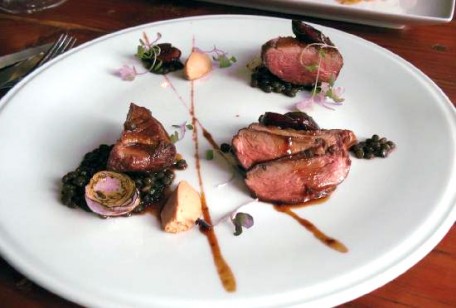 The fact that I plan my employees’ shifts by looking at the concert and theatre calendar says it all! The hardest time of day to fill a restaurant is usually the 5:30 to 7 early dinner sitting. But since we’re close to so many venues it isn’t really a problem for us. And because we’re open late, and there still aren’t very many options in the Quartier, quite a few people go for dinner after the show, or just come in for dessert or a glass of wine with an appetizer.

You grew from three to 35 employees in less than two years. You might call that a big success, especially given the lack of media buzz.

Our goal was to make our name little by little, partly to grow up gradually but also to avoid becoming yet another “flavour of the month.” We rely on word of mouth and our customers’ loyalty. We also decided not to try to please everyone. At first, everybody had a piece of advice for us: to make your restaurant succeed you have to do this or that. Instead we decided to do what we like doing, and attract a clientele that we like. 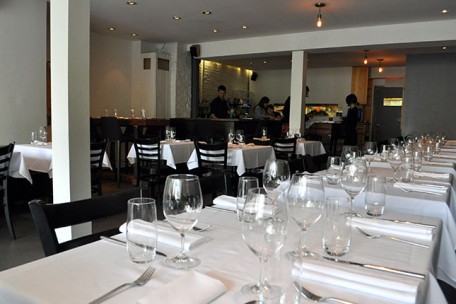 Change. But I don’t mean in the sense that it has to change, rather that some parts of Montreal need a boost. Quartier des Spectacles has set the tone. It’s doing a lot of good for the city and for projects like ours. The Quartier and its events allow us to make a living and employ 35 people. If we were in another area we wouldn’t have had that kind of success. And when we suggest that tourists go check out an installation like 21 Balançoires after dinner, they really feel as though they’re having a complete experience, that they’re in a truly living neighbourhood.