The 21 Balançoires installation is back in Quartier des Spectacles for a third year running, until June 2. Day and night, this interactive installation – part street furniture, part game – invites passers-by to enjoy a cooperative musical experience. As each swing moves a note is played, and when several people swing a melody emerges.

After sunset, the swings are accompanied by an interactive video projection on UQAM’s President Kennedy building called 21 Obstacles, inspired by classic pinball machines.

The installation’s return was eagerly anticipated, to judge by the response on social networks and the crowds around the installation since it reopened.

We talked with Mouna Andraos and Melissa Mongiat of Daily tous les jours, the creators of Montreal’s newest springtime ritual. 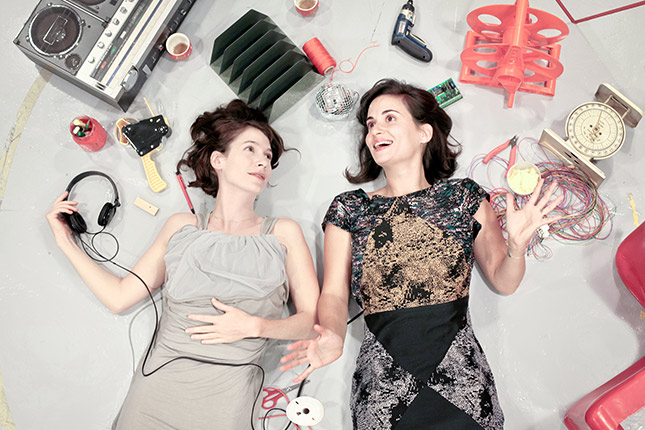 When we were approached to think about an installation for Promenade des Artistes, the space was still under construction. Our mandate was to provide a way for the public to use and enjoy the new public space.

The idea of the swings came very early on, because it’s an intuitive interface. People recognize it, and they immediately know what to do. By placing the swings in an urban setting that wasn’t a playground, we announced that this was a free space, a place where you can let yourself loose, go back to childhood… right downtown.

Why did you decide to add music and the cooperative aspect?

We were looking for new kinds of interaction to stimulate public participation. Music provides direct feedback that makes it easy for the public to join in the game, because people immediately grasp how it works.

In order to make the installation a true source of interaction among people, and not just between people and the installation, we explored the notion of cooperation with Luc-Alain Giraldeau, a biology professor at UQAM. And it turns out there are parallels between cooperation among animals and cooperation among human beings! One of the motivations for cooperating is the possibility of producing better results collectively than would be possible individually. Radwan Ghazi-Moumneh took that idea and composed a soundtrack that encourages people to collaborate with each other, because when they do the music gets richer.

In a sense it is also a nod to the name of the place – Promenade des Artistes – because it allows everyone to be a bit creative, to be an artist. It is also a way to make the connection between Place des Arts and the Maison symphonique on one side, and UQAM’s Faculty of Science on the other. 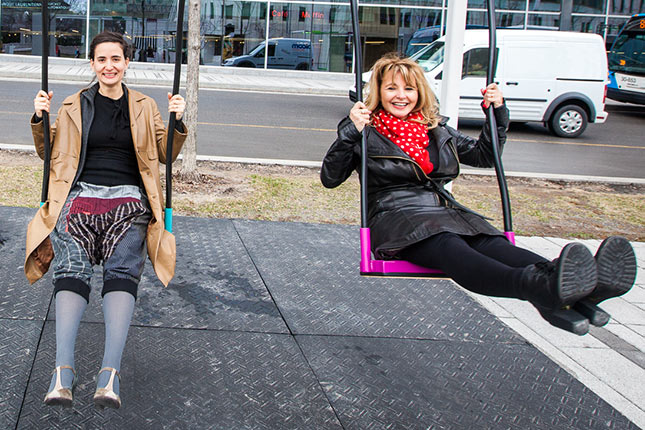 Do the public respond the way you hoped?

After the winter, we are the first to work with Promenade des Artistes. When 21 Balançoires is installed, something magical happens. Life comes back and the Promenade is transformed into a pleasant space where people of all ages are swinging and talking. And it’s thanks to that enthusiastic reception that 21 Balançoires now returns every year. At first, it was supposed to be a temporary, one-off installation.

There is even international excitement: requests are coming from all over, especially since the installation was featured on one of Oprah Winfrey’s programs. Will the swings be set up elsewhere?

We are now looking at the different possibilities. Montreal is still our home base, but if we want our company to grow we will need to have exports. Some of our other works will soon appear in Minneapolis–St. Paul and Dallas in the U.S.

They say that in the music world today, being from Montreal is a real asset for artists on the international scene. Is the same thing true of design?

It’s definitely true for interactive design! For more than 20 years Montreal has been building its reputation with players like MUTEK, Élektra and the SAT, which have all worked very hard to position the city as an important creative site in new media. We came on the scene at the right time: there’s a real culture, and a real understanding of work in this field. Elsewhere, people recognize Montreal expertise. 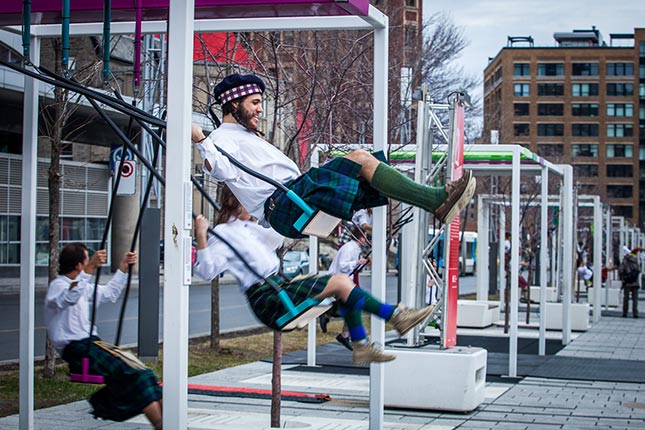 What drives you to create?

We especially like bringing positive change to environments, and surprising people by transforming things that had been considered permanent.

Working with public space is especially satisfying, because we can see the change and the effect of our work on people, which is not so obvious for those who work in industrial design, making objects that get used in private.

For us, it’s a laboratory and a playground. Right from the beginning of Daily tous les jours, we found real openness to our ideas here. Before 21 Balançoires, we presented two other works in the Quartier: Musée des possibles and Bloc Jam. 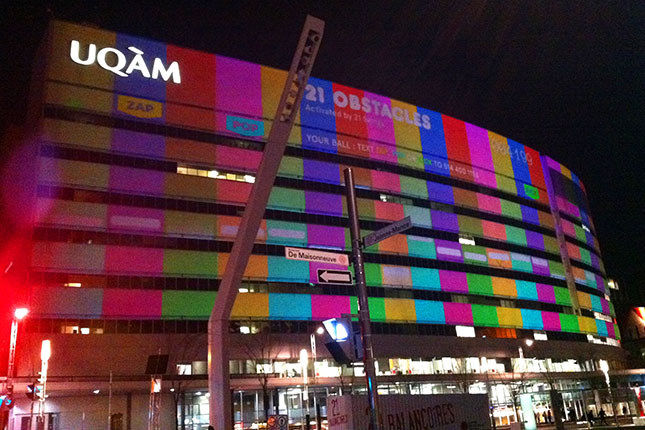