They're in the home stretch. During the Montreal All-Nighter, final-year students from the UQAM Interactive Media Communications program will unveil the fruits of the hard work they started in September. Using interactive sound and light displays, they'll encourage visitors to climb the Clocher – UQAM's landmark bell tower – with TRAME, a larger-than-life tribute to Quebec animated film.

If the word "multimedia" reminds you of the boring AV technician in your high-school library, think again. From major ad agencies to international artists like Arcade Fire and Cirque du Soleil, these future professionals will find a job market that is hungry for their talent. So forget about the guy with big glasses and short-sleeve shirts. 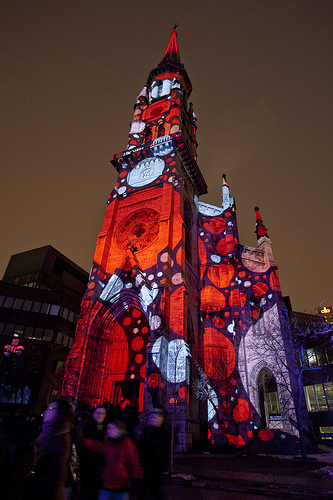 For the first time this year, the almost-graduates can claim a real-life client for their final project. The Rendez-vous du Cinéma Québécois, celebrating its thirtieth anniversary, commissioned these young creators to celebrate Quebec animation in their own way.

Night owls will be able to interact with three scenes, inspired by films like Notes sur un Triangle, Blinkity Blank and Balablok, that will transform the facade of the UQAM bell tower into a movie screen. "People can use a web app on their smartphone or tablet to connect and take control during the interactive portions. They'll move objects on their touchscreens to control the images projected directly onto the bell tower wall" explains Antoine Goudreault, the project manager and a soon-to-graduate student in the program.

To guide the good ship TRAME into port, the students from the Université du Québec à Montréal have chosen a work process that is quite peculiar and yet quite well suited to this type of project, where managers aren't always able to understand what it takes to get the job done. It's a technique that answers to the positively rugbyesque moniker Scrum.

"To give you an image, think of an organization that looks more like a flower than a pyramid. Responsibilities are distributed horizontally, allowing departments to communicate better and take a flexible approach to any bugs that pop up” explains Antoine Goudreault.

If the method is effective as its namesake is brutal, the bell tower display will tackle any lingering doubts. Spectators will have one night – all night – to upgrade to Clocher 2.0.