Warmth and colour at Place Émilie-Gamelin

While Quebec’s cottages light up long winter nights, festooned with their strings of multicolored lights, Montreal’s Quartier des Spectacles is adding another dimension to Christmas illuminations. After last year’s success with Sphères polaires and Champ de pixels, this year’s projects were chosen from among the entrants to a large-scale contest. In this series of articles, I’ll introduce you to the creators of the projects now on display at Place Émilie-Gamelin and around Saint-Laurent metro.

I met Félix Dagenais at Place Émilie-Gamelin in the middle of December, on the eve of the project opening. There wasn’t a flake in the sky, but even so, he had his hands stuffed into enormous mittens. Along with his colleagues Louis-Xavier Gagnon-Lebrun and Éric Gautron, the Éclats de verre team was making last-minute adjustments. 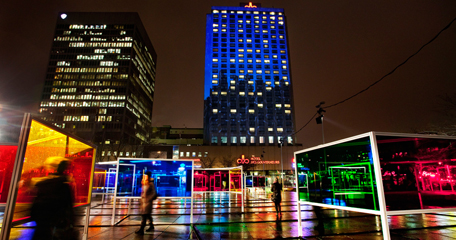 “What’s good about Quartier des Spectacles contests is that the submissions are anonymous, so the projects are judged by their quality rather than by someone’s name or reputation. That lets us create an installation like this one, even it’s our first real experience.”

For a first effort, the labyrinthine installation isn’t the least bit nervous. Including interactive projections on the façade of the Hôtel des Gouverneurs, dozens of coloured panels, illuminations and sound effects, the work will occupy the space (and passersby) until the end of February.

In the shadow of the Bibliothèque Nationale, Place Émilie-Gamelin is one of the hot spots of Montreal’s Quartier Latin. Drug use and homelessness are an integral part of this sometimes-difficult area around the Berri metro exits. It certainly wasn’t anyone’s first choice among the three sites offered to participants. For Atomic3, it was a golden opportunity.

“We picked Place Émilie-Gamelin for a challenge. Our first decision was to add colour and warmth to a space that becomes gray and sombre in the winter. We also wanted to do something that would work in the day and the night, to avoid losing half of the time.”

In the tradition of Jean-Paul Mousseau and Marcel Ferron, figures from the great resurgence of Quebec art in the 1960’s, the Éclats de verre team wanted the showcase to function as a window on the historical and cultural legacy of la belle province. “We had the idea of animation, warmth, light but also the idea to integrate things into the space. And this space belongs to Melvin Charney.” 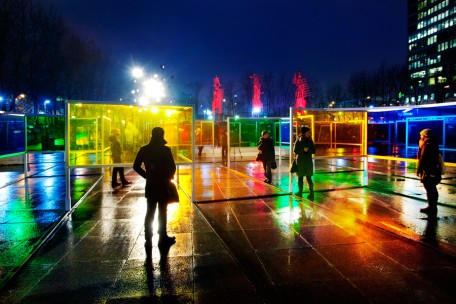 If you’re like me, you’ve never noticed the three sculptures ranged along the top of the hill in Place Émilie-Gamelin, and you’ve probably never heard of their creator: Montreal architect, urban planner and sculptor Melvin Charney. Charney stood apart from the era of mayor Jean Drapeau, questioning and reframing the relationship between the citizen and the environment. As an homage to him, the façade of Hôtel des Gouverneurs transforms into an immense screen where passersby can activate animated video sequences.