Lighting up your end of term

Exam season is never easy, even more so now that we've turned our clocks back and it's getting darker, earlier and earlier each day. But both UQAM design students and bookworms have earned a little sunshine: the UQAM Centre de design and Grande Bibliothèque are now part of the Luminous Pathway of the Quartier des spectacles! 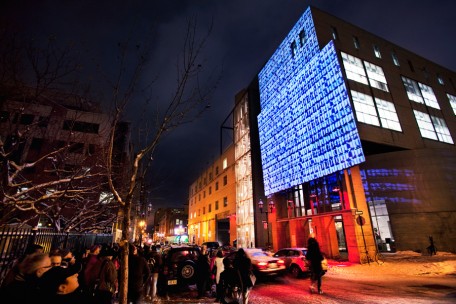 On wednesday, November 23rd, the Centre de design was lit up, the same night as the opening of an exhibit that aims a spotlight at the work of Norman Slater, a Montreal artist/designer whose name is unfortunately little-known to the wider public.

The exhibit shows Slater’s work from the mid-1950’s to the mid-1980’s. It inspired Emmanuel Mauriès Rinfret to create the projection that illuminates the building, which is on display every night. 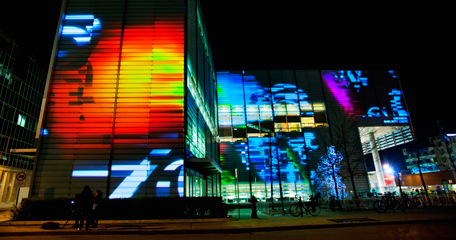 Last monday, we also got to see the lighting up of the south façade of the Grande Bibliothèque. According to its creators, Lucion Media, the animation was conceived as a way to reveal the human and digital presence that can be found inside the building. The result is beautiful and colourful, and it can be seen from Tuesday to Sunday, from nightfall until 2AM.

These projections are different from the other illuminations in the Quartier des Spectacles: they're dynamic, and will be able to display works from many different designers. On December 19, the current projection at the Centre de Design (entitled Anticipation 1) will be replaced with a new work from Alexis Laurence, inspired by the building itself and taking its cues from the visual identity of the Quartier des Spectacles. This video will run until January 3, when Emmanuel Mauriès Rinfret takes over again to present Anticipation 2, another piece inspired by Slater’s work and the identity of the Centre.

You can see all the new projections at the Centre by walking along Sanguinet, every night after 6 PM. The Norman Slater, leçons de design exhibit will run until January 22, 2012.