A ballet of light

Yesterday night, the skies over Montreal were lit up like never before. Imagine the searchlights of Place Ville-Marie, multiplied by a dozen and controlled by regular members of the public. What we witnessed was nothing less than a sublime aerial spectacle.

The searchlights that make up this work from artist Rafael Lozano-Hemmer (a Montrealer of Mexican origin) were set in vigorous motion by Quartier des spectacles passersby, to mark the opening of La Triennale québécoise 2011.

Despite the cold that had settled over the city, young and old alike eagerly bundled up to get in line early for this unusual, participatory presentation. You could feel a palpable excitement, a feeling equal to the grand scale of the work, spreading among the crowd. 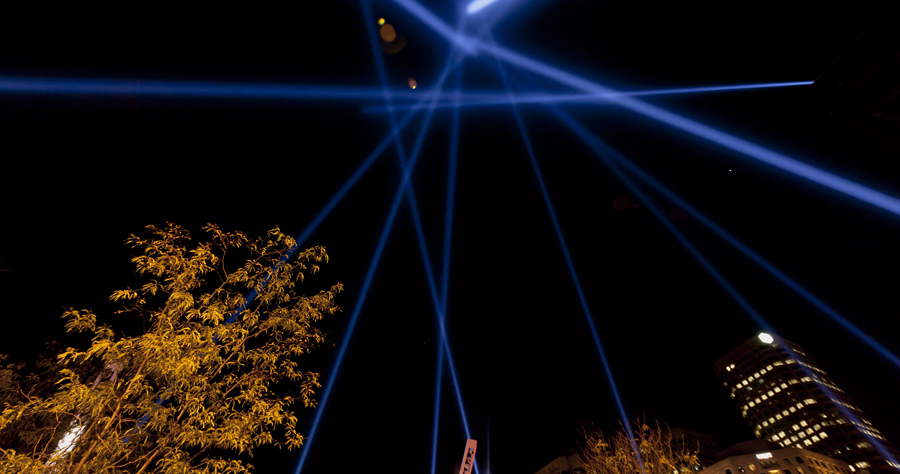 While speeches were being made, children led their parents to the cranks that control the immense 10,000-watt spotlights, eager to join the luminous back-and-forth with the others present at the unveiling.

The artist, who has already presented his interactive works in the world's largest cities, entitled this piece "Intersection articulée". What's fascinating about the experience is that it's a social interaction that takes place in the sky. Even as human participants control the beams from terra firma, they intersect and interact in the skies above Montreal, creating a kind of celestial encounter. You really have to experience it to understand it fully.

During the opening festivities on October 6, smiles spread from face to face, and the unveiling was accompanied by many ooohs and aaahs as well as admiring applause directed at Rafael Lozano-Hemmer.

This giant work, on exhibit and freely acessible to the public until November 6 at Le Parterre in the Quartier des spectacles, can be said to represent many things. For some, the searchlights in the sky will remind them of the searchlights pointed at enemy bombers during wartime, while others might think themselves thrust into the epic epoch of Star Wars. The young, for their part, might turn the cranks and imagine that they're Toy Story hero Buzz Lightyear.

However you interpret the work, the most important thing is to come and see it. It's a real cultural first for Montreal. The sky has never been so bright above our city.