FOR ME, CULTURE IS… A WEEKEND UP AGAINST THE WALL

Quebec's voices will come together during the 15th edition of the Journées de la culture, on Friday September 30th and all weekend long, with the help of video designer Gabriel Poirier-Galarneau

To find and collect the thoughts of Quebec's people on culture would take a caravan crisscrossing Quebec from one end to the other. At least that's the idea that drove the Culture pour tous organization to undertake their Je m'affiche pour la culture project. All summer long, the Caravane de la culture travelled the roads of Quebec, stopping off at festivals to take portraits and record the words of people of all ages. The result? A virtual gallery of faces and thoughts, each answering one simple question: "For me, culture is…" Whether it's "the right to be different" or "the spice of life", all the responses can be seen in a video montage projected onto a wall in the Quartier des spectacles. 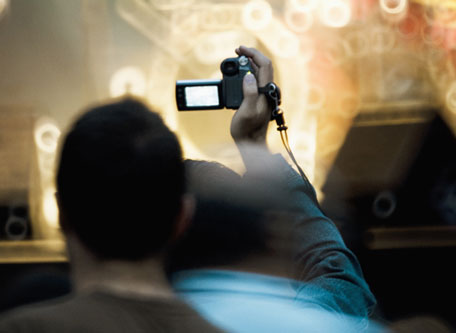 From dusk to the wee hours of the morning, 3,000 voices will be randomly projected across the large blank wall of the Bon Blé Riz restaurant next to the Saint-Laurent metro station exit. And that's not all! To make the installation even more interactive, you can come by and send a message that will immediately appear on the wall, joining the stream of thoughts.

"It's not really a work that belongs just to me, because it honours and highlights everyone's statements" explains video designer Gabriel Poirier-Galarneau, who worked at Urbania for almost five years -- a period he considers his apprenticeship.

"With Je m'affiche pour la culture, we wanted to make people feel that culture is for them, that it is them, that artists reflect them" muses Louise Sirco, president of Culture pour tous. Her organization launched the Journées de la culture 15 years ago, and has remained dedicated to the enhancement and democratization of culture.

"It's not easy for me to say exactly what the 'democratization of culture' is" admits Gabriel Poirier-Galarneau. "I can express myself better in images than I can in words. But what's fun is that now it's possible for anyone, with a little motivation, to create and distribute works that can be seen by millions of people. That wasn't the case before."

So what is culture to you? Don't forget to look up when you're exiting the metro at Saint-Laurent this weekend, to take a look at what thousands of your fellow-citizens think about culture. And to add your voice.

The 2011 Caravane of Je m'affiche pour la culture! will be at Place Pasteur all weekend long.