A few minutes at the circus

You're calmly strolling down the street in the Quartier Latin node of the Quartier des spectacles. Suddenly the person next to you launches into an extraordinary series of acrobatic pirouettes, while the building you're walking past becomes a playground for skilled tightrope walkers. Have your co-workers been putting LSD in your coffee again? No! You've witnessed a Minute Complètement Cirque, currently taking over the city until July 24.

For those out of the loop, the new baby in the big family of Montreal festivals is turning two this year. "It's Montréal Complètement Cirque!" says Minutes Complètement Cirque creator and director Anthony Venisse, his passionate ardor coming through the phone with such force that I get a sense of just how emotionally committed he is to the project.

"The festival is a celebration, but it's also an effort to get people together and show them the diversity of the circus arts. Being out on the street is very important to us, so we can get closer to the public." 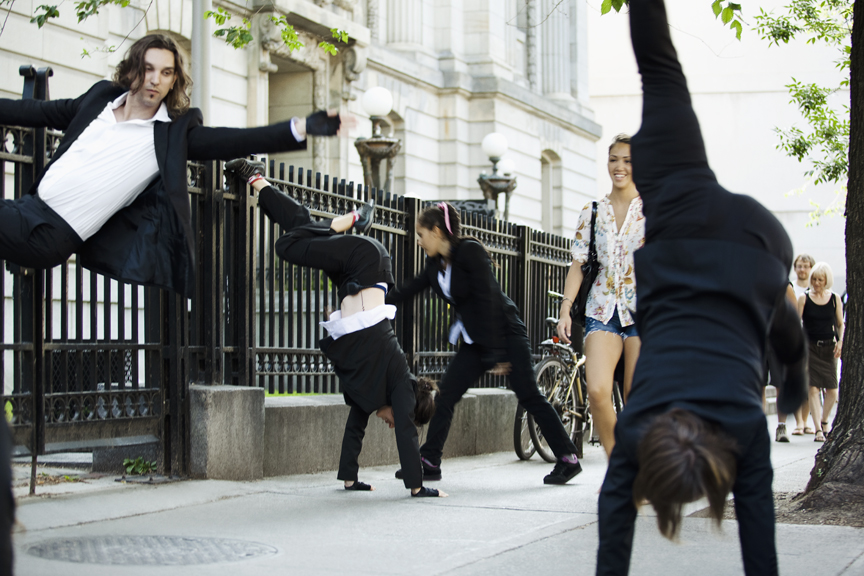 A merry band of some fifty-odd young artists, plucked from the circus schools of Quebec over the last several months, will invade the city and occupy nine outdoor areas until July 23. They'll use common street furniture as props in their performances, and their fifteen-minute shows will play out across the roofs, balconies and even the Bixis of the Quartier Latin node.

"We want to break up the routine of common existence, fill the neighbourhood with our energy, surprise people and put them off balance. We act to open up new spaces, we suspend time, and then we vanish."

Clearly inspired by the now-famous flashmob phenomenon, the Minutes use the urban stage of everyday life to flood the city with circus arts. "Because we're on the street, we're beside people, we're among them. The spectator's experience takes place in such close proximity, it's a huge change from being in a hall. You can forget the fourth wall right away."

From Tuesday to Saturday, around 5:30 PM and 9:30 PM, you'll stand a good chance of catching a pleasant surprise. For those of you who don't like to take chances, there's a list of events, sites and dates on Facebook.