Last night, I went to the place des Festivals to see a performance of Continental XL, the new work by Sylain Émard, presented as part of the Festival TransAmériques. From the moment I arrived, my attention was drawn to something: difference. The performers were of different ages, from different cultures and different contexts. All of these different people had come together for the same, single reason: the pleasure of dancing.

Before I arrived at the performance, I had been asking myself what this Continental would look like. Should I expect to see my grandparents? Would this mix work? Would it preserve the essence of the Continental?

"I've always been fascinated by line dancing," the choreographer told me, with ample enthusiasm. "I can go to a church basement or even a community centre and just watch people dance for hours."

But how does a well-known choreographer let himself become so enraptured by such a kitschy dance? For Sylvain Émard, it was all about the careful effort of the line dancers. "You can feel their real pleasure in dancing," he explained. 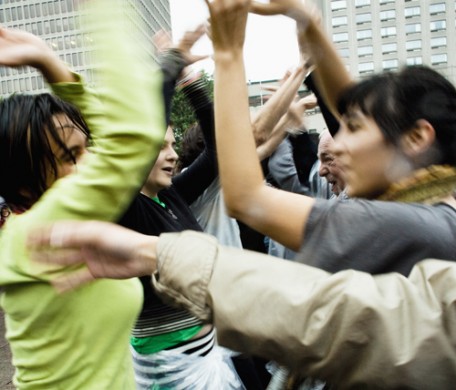 This gave him the idea of combining the Continental with contemporary dance, to pay his own kind of homage to line dancers. And he nailed it. You start to feel the contagious pleasure of the dancers from their first steps. They didn't see it, but I saw it in them. You can't help but smile at their motivation and verve.

When urban space plays a role

Continental XL came to life at the place des Festivals. It's an environment that lets me experience something unique in the open air, every time. I always feel like I'm part of the show.

"It's hard for a choreographer to mount a performance outside. It demands a level of logistics and resources that isn't always available," Sylvain told me, pointing out that it was the director of Festival TransAmériques who suggested he take the show outdoors. "It's thanks to the expertise of the FTA that these outdoor shows could happen" he added.

It's true that each public space has its particularities, and it's those special qualities that make it unique. In dance, the space itself becomes a performer, just like the dancer, the music and the lighting. "You really have to know every detail of an urban space to use it optimally" explained Sylvain.

He's taken this to heart by highlighting the place des Festivals fountains, which adds a magical touch to the performance. "The fountains appear at two exact moments, and then only for a bit."

Continental XL, a dance of joy

When I asked Sylvain to describe Continental XL, he responded simply. "It's joyful. Watching Continental XL is an opportunity to see 200 people who want to show you how fun it is to dance" he told me, laughing.

Having seen the performance, I can confirm that he's right. Seeing these people dance is good for you. One thing is for certain with Continental XL: people let themselves be swept away by a wave of contagious happiness, right in the middle of downtown.