A TRIBUTE IN LIGHTS FOR CLUB SODA, METROPOLIS AND THE RED ROOF CHURCH

New architectural illumination will light up the personality of three new sites: Club Soda, Metropolis and the Church of St. John the Evangelist (that’s the one with red roof). So far, 17 cultural venues have switched on and shine brightly in the nighttime landscape of the Quartier des spectacles.

Club Soda is adding a new, permanent show to a lineup that already sees hundreds of performances each year. The façade now presents a numeric work of art. It's Moment Factory that has developed the multimedia design for Club Soda that combines video, light, and signage effects. To respect the traditional exterior image of the hall, the design digitizes its marquee and vertical banner without overwhelming them. The façade illuminations will also vary with the atmosphere to create different impacts. 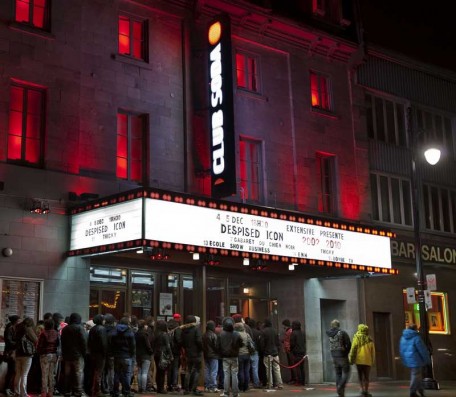 The lights twinkle and the stars shine on the Metropolis marquee. Inspired by old-fashioned marquees while employing new technologies, Moment Factory took the mandate to create a marquee worthy of the prestigious hall. To do this, they used an anodized aluminum façade perforated with hundreds of small and large stars. It's magic! 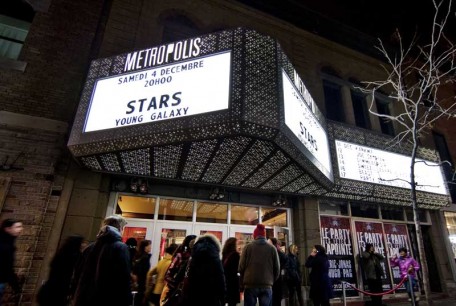 The Red Roof Church now has a gentle new lighting design by Lightemotion. The design highlights three particularly significant elements of the neo-gothic building: its greystone façade, its windows and its distinctive red roof. The façade is bathed in a soft light while the windows are illuminated from within. For the roof, the spiritual side of the site inspired the designers to create a lighting scheme composed of five large streaks of light that sweep across the surface like the fingers of a hand. 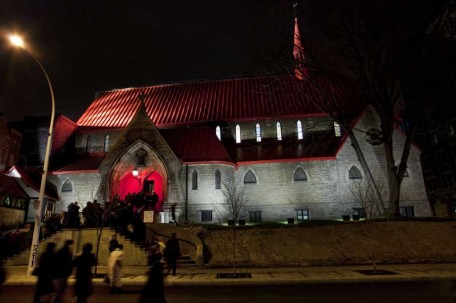 The luminous pathway pays its own kind of tribute to Montreal’s culture; a nocturnal tribute that uses light to reveal the splendor of the buildings and the personality of these important cultural institutions. We want to illuminate all cultural venues of the Quartier des spectacles.