Exhibition "Washed Up" by Alejandro Durán 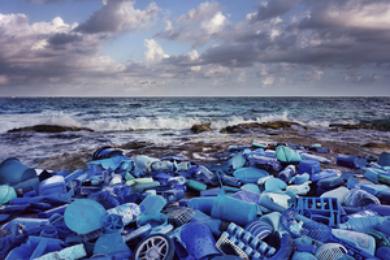 Alejandro Durán creates colourful, surrealistic and fantastical landscapes with garbage from more than 50 countries found washed up on the shores of the Sian Ka’an Biosphere Reserve in Mexico, a UNESCO World Heritage Site. Washed Up is a photographic project aimed at raising environmental awareness while making a powerful argument for changing our consumerist ways.

The photographs can be viewed on the artist’s website.

Alejandro Durán was born in Mexico City in 1974 and now lives and works in Brooklyn, New York. Durán is a multimedia artist who uses his work to question humanity’s ambivalent relationship with nature, particularly the tension between the natural world and the overbuilt world. The Washed Up series opened at Hunter's East Harlem Art Gallery in New York City in 2015.

The exhibition is presented by the Ville de Montréal in collaboration with Artpublix. It is located on Jeanne-Mance Street south of Sainte-Catherine, in the Quartier des Spectacles.