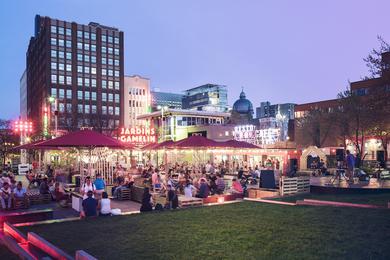 Les Jardins Gamelin, the spring-summer incarnation of Place Émilie-Gamelin that charmed Montrealers and tourists last year, returns to the Quartier des Spectacles on May 17. To launch the new season and unveil the program running until September 30, the media and the public are invited to the grand opening on May 17 at 5:00 p.m.

The party will also serve as the official kick-off to the spring-summer season in the Quartier des Spectacles.

Formed in August 2012 by Marcus Freitas (DJ MKS) and Wallace Roza (DJ Skambo), this duo explores the many rhythms of Brazil. They touch on every genre, creating a fusion of old and new sounds and shifting with ease between samba and hip-hop, taking fans on a tropical journey.

Driven by a passion for traditional Colombian and Eastern European music and dance, this orchestra celebrates movement and freedom. With 15 artists from a variety of backgrounds, it’s one of Montreal’s most energetic and creative groups, guaranteeing an exceptional musical and visual experience.

Winner of Radio France Internationale’s Syli d’or 2015 in the Afro-pop and favourite artists categories, this group from Kanesatake is on a mission to be a role model for kids by hosting traditional music and dance workshops. As its reputation has grown, it has emerged as a proud global representative of our First Nations.

Biography in French only

Not only does this acrobat have impeccable circus training, she also studied contemporary dance and worked with Kyra Jean Green and the Rubberdance Group. She has performed her original routines, which she choreographs, at several festivals, including the Montréal en Lumière and Nuit Blanche.

This versatile DJ only spins 45s, like they did in the golden age of soul. A self-described vinyl addict, he’s appeared all over North America and started several musical evenings and events. He’ll get the crowd dancing with genres ranging from funk to rock.

This singer-songwriter, who emerged on the local electronic music scene in the last decade, is on the rise! She’s just released her third album, Chrome, which includes plenty of catchy tunes sung in French, against a musical backdrop reminiscent of New Wave and 80s pop.

This 10-member hip-hop collective is a commanding presence on the local scene, known for its explosive shows and hard-hitting lyrics. The 2016 album The Big Band Theory re-energized the group, and its new internationally flavoured tracks and unique arrangements have been wowing audiences around the world.

To find out more : JARDINS GAMELIN 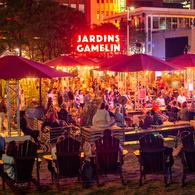 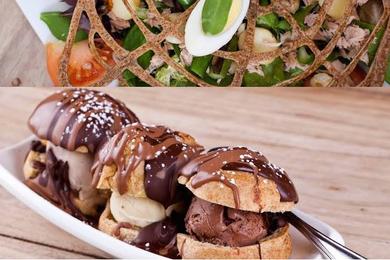 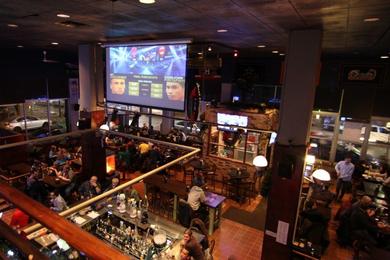