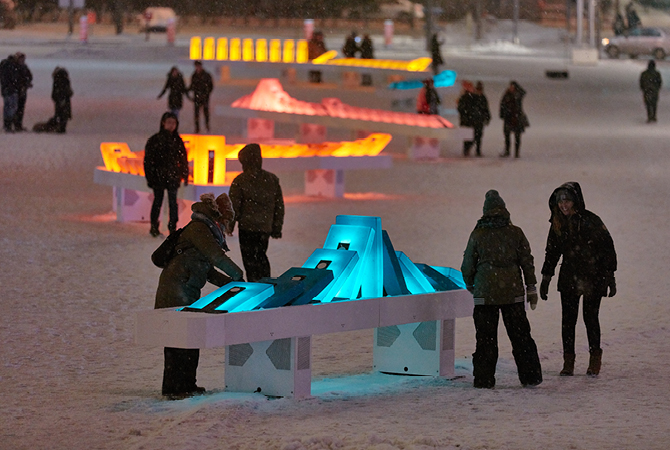 Make the most of the Montreal winter with effet domino, a Luminothérapie event!

domino effect, from Ingrid Ingrid, is a fun and entertaining experience that brings people together and fosters a spirt of cooperation. The interactive installation consists of 120 giant dominos distributed across several stations. The public is invited to play with them, creating an infinite variety of musical and luminous effects in the process.

Topple the dominos in a long cascade and enjoy the results as the domino orchestra plays a unique musical work in an illuminated rainbow of pastel hues! Every set features a different sound profile (vocals, percussion, marimba, balafon or flute), and every domino has its own sound. You can even play DJ by “scratching” a domino by spinning it at different speeds or drumming on it with your fingers.

Join forces with other players to set up the dominos faster and trigger the next cascade, or nudge them in the opposite direction to reverse the sound sequence. The installation is rounded out by an architectural projection on UQAM’s Pavillon Président-Kennedy, created by Nouvelle Administration. The projection borrows from the installation’s colourful hues and pairs them with graphics that reference the world of dominos.

With its vintage tropical colours, the interactive and collaborative effet domino experience makes for a positive, invigorating outing to help you thumb your nose at the winter gloom!

The installation is rounded out by an architectural projection on UQAM’s Pavillon Président-Kennedy, created by Nouvelle administration. It combines graphical codes and visual tricks referencing dominos. Space, sound and colour are central to this exploration in which sounds trigger chain reactions and novel dispersal patterns of the dominos.

The projection’s graphical world is a visual transposition of the music, inspired by the sounds of the domino stations. The vibrant hues and dynamic animations contrast with the whiteness of winter, while the black dot, a reference to classic dominos, attaches itself to the images.

“Nearly all of us of have had the pleasure of toppling over a long line of dominos! We decided to use that simple, fun and universal pastime to bring passers-by together and foster a spirit of cooperation. We hope that participants will join forces to set the dominos back up and explore the different soundscapes the dominos create whenever they are handled or knocked over. For effet domino, we wanted to use bright tropical colours and fun, flashy patterns and sounds to give the installation and video a really playful feel and help people forget the winter gloom.”

Effet domino at a glance: 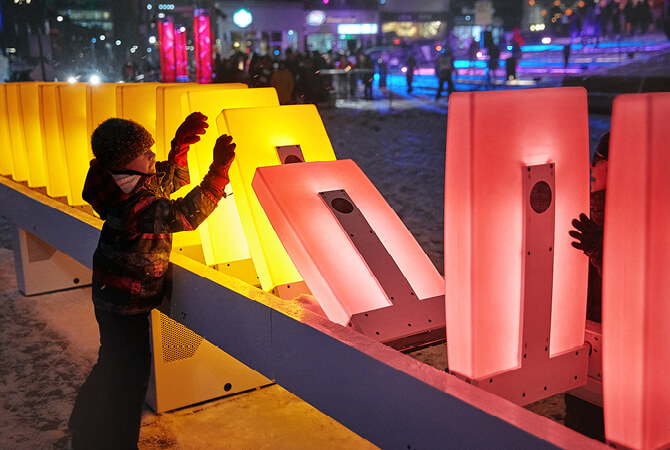 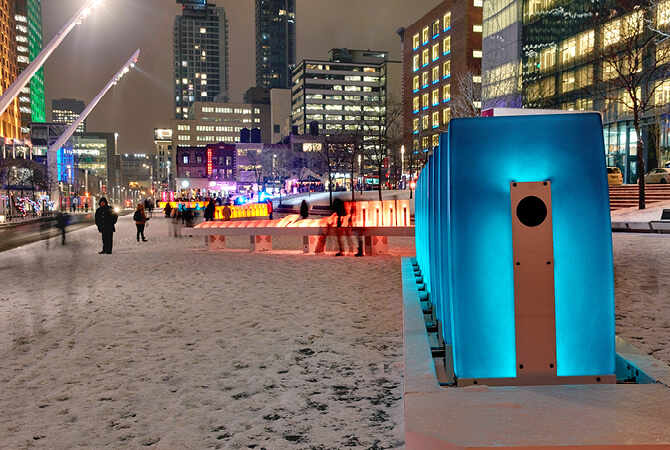 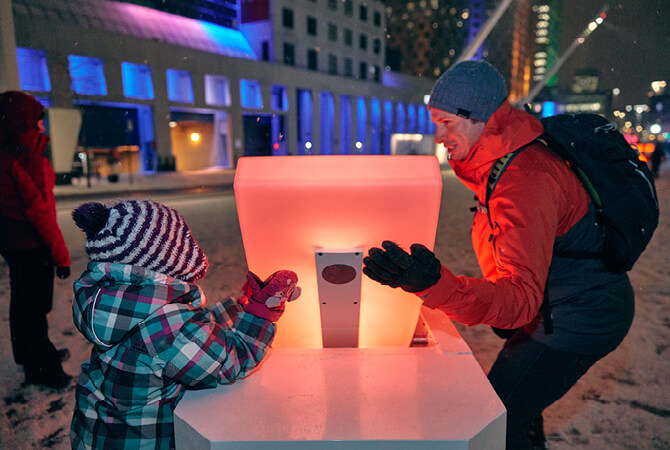 An original work by Ingrid Ingrid

ngrid Ingrid is a Montreal-based design studio that creates and develops innovative interactive experiences at the crossroads of art and technology. Its playful creations, not confined to walls or screens, show special sensitivity to content. Ingrid Ingrid shakes up old ways of thinking; it experiments with, studies and reinvents our relationships with the things around us.

Enrique studied art and architecture in Mexico, the U.S., Canada and Italy and holds a master’s degree in Urban Management and Architectural Design from Domus Academy in Milan. He has collaborated on numerous artistic, architectural and urban development projects. In 2012, he was part of the Migrating Landscapes exhibition, which represented Canada at the Venice Biennale of Architecture.

In 2000, Alexandre received his diploma in Lighting from the National Theatre School of Canada. He then joined Cirque du Soleil as assistant to the lighting designer. He worked on several productions, both on tour and at a resident show in Las Vegas. In 2007, he began putting his stage and show lighting skills to work for museum and architectural projects. Since founding LightFactor in 2011, he has carried out several major projects, including the Rio Tinto Planetarium permanent exhibition, the “Napoleon and Paris” exhibition at the Canadian Museum of History, a number of exhibitions at McCord Museum and BAnQ, as well as architectural lighting for the Biodôme migration project, the Maisonneuve Public Library, the ALT-Griffintown hotel awning and several projects for Groupe Nordik.

Myriam studied jazz and electric guitar and earned a master’s degree in electroacoustic music from Université de Montréal. For over two years, she has travelled the globe (Europe, the Middle East and Asia) presenting her interactive musical performances. In 2015, her orchestra performance of interactive musical tops, Soft Revolvers, earned her an honourable mention from the Ars Electronica international interactivity awards in Austria.

To learn more about the competition:

The Quartier des spectacles is Montreal’s cultural heart, boasting North America’s greatest concentration and variety of cultural venues. The district is the year-round host to countless festivals and events, many of which include free outdoor shows and activities. The Quartier hosts innovative urban installations featuring cutting-edge lighting design, immersive environments and interactive digital spaces. Year round, the Quartier presents artistic video projections on building façades. The Quartier des Spectacles is also a showcase for new multimedia technology, making Montreal a global leader in the urban exhibition of digital content. The Quartier des spectacles Partnership, founded in 2003, is a non-profit organization with more than 80 members active in the district. It is responsible for animating the Quartier des spectacles by programming cultural activities, managing and animating public spaces, providing distinctive illumination and promoting the Quartier as a must-visit cultural destination. The Partnership is supported by the Ville de Montréal.

9TH EDITION OF LUMINOTHÉRAPIE: DOMINO EFFECT IS SET TO BRIGHTEN UP PLACE DES FESTIVALS THIS WINTER!