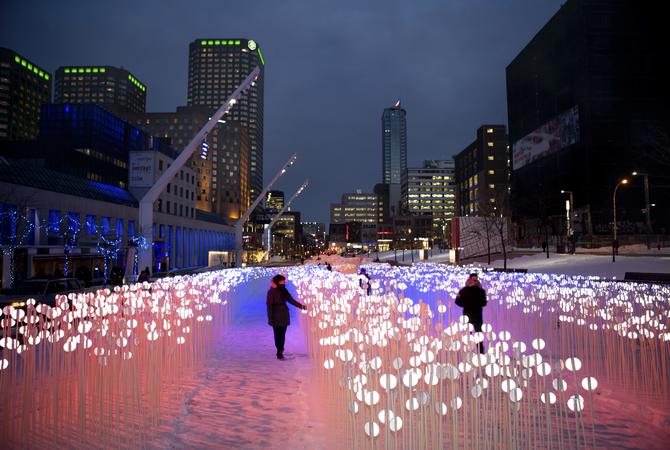 Entre les rangs is a contemporary art installation that reinterprets a slice of Quebec’s agricultural history, evoking fields of wheat swaying in the wind as the seasons pass. Comprised of thousands of flexible stems topped with white reflectors, the work turns ambient stimuli into a dynamic animation. Surrender to a sensory experience and enjoy a fascinating winter stroll. As you walk along the winding paths, the stems merge into a gigantic canvas, rippling in the wind and caressed by light.

In any project, you have to be inspired by the site and not impose an idea on a site. For us, the Place des Festivals is a remarkable place. It's a long and narrow place, empty in winter, right in the middle of the city, which reminded us of the ranks established by the seigneurial system in New France, which divided the lots of land. We found the link to agriculture, the field and the seasons interesting.

Founded in 2003 by Rami Bebawi and Tudor Radulescu, and composed of a collective of dynamic architects, KANVA is a Montreal-based multidisciplinary architectural firm whose work is at the forefront of thinking, imagining, drawing and constructing collective space. KANVA has an approach that seeks to re-question and transform the built environment. The firm approaches each project as an opportunity to tell a story, to imagine a place and to expand the scope and dialogue between art and architecture.

The team is inspired by the stories rooted in place and, for each project, seeks to understand the interactions of users with their environment with a strong belief that architecture, art and science are learning tools for transforming the built environment and those who live in it.

Each year, a competition is held by the Quartier des Spectacles Partnership , inviting competitors to form multidisciplinary teams and propose installations and video projections with a strong urban design component, with input from all artistic disciplines. Thanks to this process, the event encourages not only creativity but the emergence of new artistic practices.

THE MONTREAL MUSEUM OF FINE ARTS ALL AGLOW FOR THE HOLIDAYS

Luminothérapie in Quartier des Spectacles: unveiling of the 2013-2014 works

Luminothérapie competition: and the winners for 2013-14 are…