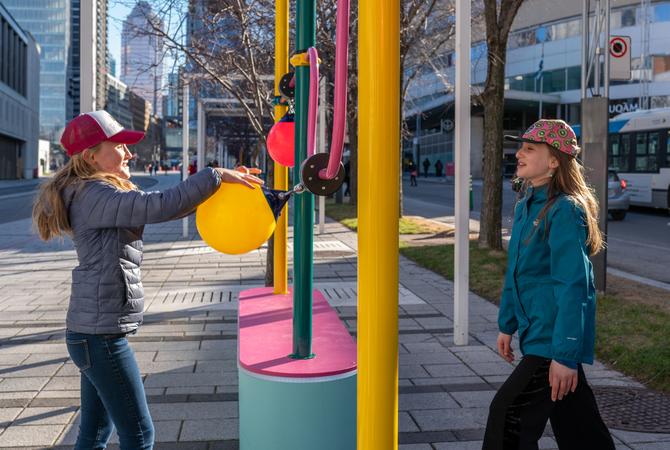 It calls you from afar. The city buzzes. It whispers or cries, making sounds and noises that form the nameless soundtrack to our lives. What if we added a little fun to the cacophony?

Put down your bag, forget your worries, jump in: hop, tap, sing. PLAY! Get together, get away, forget that you hit a low, forget that you were missed, forget that you missed the city. Come see your old friends, meet some new ones, surprise yourself by revisiting childhood. SHOUT!

Discover, smile, slap, spin. Follow me the whole way through, then let’s start all over. AGAIN!

Listen, explore, participate, and the music will ring out. Glittering lights, dazzling colours, the game begins, you answer me, I respond. SING!

Become an instant musician when Ville orchestre crosses your path. HAVE FUN!

The collective behind Ville orchestre are friends. Mostly artists, partly musicians, wholly creative. The installation is an allegory of the one-man-band. Like the legendary figure of the multi-instrumentalist, the installation is triggered by voices, feet or hands to create a series of distinct tunes across the four-station path.

Robocut has been based in Montreal for over than 13 years. The studio is a truly innovative laboratory specializing in the design and manufacture of unique projects integrating technology and interactivity. Its multidisciplinary team develops original creations and turnkey solutions that allow the firm to take centre stage in the cultural, museum and event production sectors throughout Canada and the United States.

Philippe Savard is the founder and technical director of Robocut Studio. After studying film, he completed the Computation Arts program at Concordia University. He worked for five years with ESKI (PixMob), before founding his own design and manufacturing company in 2008 with the mission of crystallizing ideas from the cultural and museum sectors. Robocut has since worked with numerous internationally reputed artists and design firms. Thousands of projects have been produced by Robocut’s team of industrial designers, fabricators and new media and technology designers.

Vallée Duhamel is a duo of Montreal artists whose work involves experimentation and a signature playful style. Their work is strongly focused on design based on animation, video and installations.

Julien Vallée and Eve Duhamel have exhibited their work in Montreal, Toronto, Vancouver, Berlin, London, Buenos Aires and Los Angeles. Their installation Smash Pong was shown at the Contemporary Arts Center in Cincinnati, while their video and interactive installation Danse Dance was presented at Centre Clark in Montreal. Their most recent video, The Strangers, won multiple awards including the Audience Award at South by Southwest (SXSW). They have also made music videos for artists such as Katy Perry, Pierre Lapointe and Cœur de Pirate.

Nicolas S. Roy is the president and creative director of Dpt., a studio specializing in the creation of interactive and immersive experiences. Using a multidisciplinary approach combining art, technology and storytelling, he has worked with institutions and companies such as the National Film Board, Nike, Place des Arts, Google, Cirque du Soleil and Samsung.

Download the images and videos
Please include captions and credits.